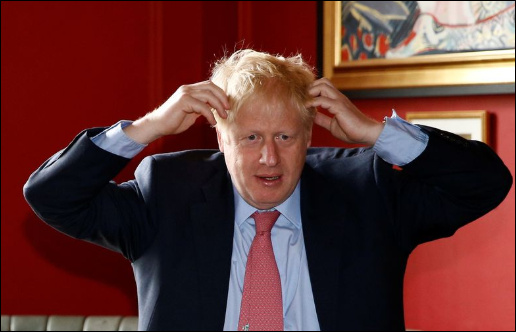 The Tory leader crushed Jeremy Hunt in the race to replace Theresa May at the top.

Despite his chequered record both in politics and his personal life, BoJo is beloved by the Tory faithful.

And Britain's new PM has been rocked by many scandals over his 55 years.

From admissions of drug taking, to fathering a love child and repeated affairs to being sacked for lying about a quote, he has weathered many storms.

Here are his six most controversial scandals.

1. Sacked for lying about a quote

Boris was in his early 20s when he landed a plum job at The Times.

But he was unceremoniously sacked for making up a quote in a piece about archaeologists discovering Edward II's palace.

The story made the front page and included a quote from historian Colin Lucas.

Lucas was BoJo's godfather, but there was something wrong with the quote.

He claimed at the time: "The trouble was that somewhere in my copy I managed to attribute to Colin the view that Edward II and Piers Gavestone would have been cavorting together in the Rose Palace."

Unfortunately for Boris, Gaveston had been executed 13 years before the palace was built.

The now PM was dumped by The Times, although he has since played down his 'error' as nothing more than a schoolboy blunder.

After repeatedly denying that he had ever taken cocaine he finally came clean during the Tory leadership race.

But, as always, with Boris even his confession wasn't crystal clear.

Asked directly while being interviewed on Radio 4 when he last used the Class A drug, he replied by saying a "single inconclusive event" when he was a teenager.

He was asked to clarify if he had taken illegal drugs after  giving conflicting accounts of the incident  in previous years, before he stood for the leadership.

Boris replied: "I think the account of this event when I was 19 has appeared many, many times.

"I think what most people in this country want us to really focus on in this campaign, if I may say so, is what we can do for them and what our plans are for this great country of ours."

This time he was asked directly when he last took cocaine.

Asked if he had taken cocaine since then, he said: "No."

It's fair to say that Boris has had a complicated love life.

As well as four children with his second wife, Marina, the new PM has at least one love child.

Back in 2009 BoJo had an affair with the wife of a property developer, Helen Macintyre.

Later that year she had her daughter, Stephanie.

She tried to keep their child secret and even launched legal action against a newspaper to prevent them publishing a report.

However, judges ruled the public had a right to know about Boris's daughter.

An earlier affair with Petronella Wyatt also resulted in her falling pregnant twice.

Both pregnancies were aborted and their relationship lead to Boris being sacked from Michael Howard's cabinet for lying about the affair.

Boris Johnson described black people as “flag-waving piccaninnies” with “watermelon smiles” in a 2002 column for the Daily Telegraph.

He apologised six years later for the racial slurs which he used to mock Tony Blair’s travels across the globe.

He wrote: “What a relief it must be for Blair to get out of England. It is said that the Queen has come to love the Commonwealth, partly because it supplies her with regular cheering crowds of flag-waving piccaninnies”.

In another passage he added: “They say he is shortly off to the Congo. No doubt the AK47s will fall silent, and the pangas will stop their hacking of human flesh, and the tribal warriors will all break out in watermelon smiles to see the big white chief touch down in his big white British taxpayer-funded bird.”

Boris has been married twice but he's had numerous affairs over the years.

He married his university girlfriend Allegra Mostyn-Owen in 1987, but they split after six years in 1993.

He was having an affair with British lawyer, author and columnist Marina Wheeler, who he married just weeks after the divorce went through.

But Boris's affairs didn't end there, and he had a four-year relationship with writer Petronella Wyatt when he was editor of The Spectator.

Maria threw him out of their Highgate home.

He described reports of the affair as an "inverted pyramid of piffle" but it cost him his position as shadow arts minister as he was forced to quit for not being honest about it.

There are also reports that during his affair with Petronella, known as Petsy, he was also involved with journalist Anna Fazackerley.

Maria took him back, but sent him packing again in 2009 when he fathered a love child with arts consultant Helen Macintyre.

However Boris and Marina now appears to be over after his relation with PR guru Carrie Symonds.

The couple's £3.8m home went up for sale and he reportedly wanted a 'quickie divorce'.

Boris has made countless awkward and sometimes downright embarrassing political gaffes over the years, on some occasions insulting entire countries.

Jean L Kekedo, Papua New Guinea's High Commissioner in London, was not happy, saying: "I consider the comments, coming from a senior British MP very damaging to the image of Papua New Guinea and an insult to the integrity and intelligence of all Papua New Guineans."

During the 2008 Beijing Olympics he offended his hosts when he said it was a misconception that table tennis had been invented by the Chinese and had in fact developed from a Victorian English game called "whiff-whaff".

Boris faced calls to be sacked in October 2017 after an astonishing gaffe at a fringe event during the Conservative Party Conference.

Mr Johnson said his trip to Libya in August was "fantastic", saying: "I think there is a genuine prospect of something happening there."

While praising the country, he said: "The only thing they've got to do is clear the dead bodies away and then we'll be there."