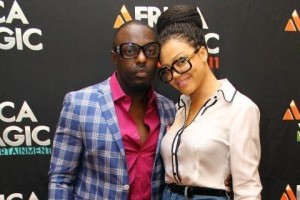 Ghanian actress Nadia Buari and Nollywood bad boy Jim Iyke have confirmed that they are dating. The two took to twitter to profess their love.

Nadia tweeted: “There comes a point in ur life wen u realise who really matters, who never did and who always will. I named him Skittles, he calls me space.”

Shortly after, Jim Iyke followed with this tweet: “She calls me Skittles. I named her space, D gift of laughter, companionship n trust is incomparable. BFF. Love is a f***ink beautiful thang!”

The two have been seen together several times after Jim Iyke’s spat with his ex-fiance Keturah Hamilton. They were also spotted together at that Ghana Music Awards.