Former US President Barrack Obama has released his Summer playlist. Obama has consistently released a list of songs that he listens to every summer since 2015.

Obama shared a list of 42 songs featuring different artistes from around the world with Africa being heavily represented.

Burna Boy, Tems, Pheelz and Buju are some of the African artistes who made the cut.

“Every year, I get excited to share my summer playlist because I learn about so many new artistes from your replies. It’s an example of how music really can bring us all together. Here’s what I’ve been listening to this summer. What songs would you add?” Barack Obama asked while sharing the summer playlist.

Tems, whose song ‘Vibe Out’ was featured on the list is currently flying high after she was featured on Billboard Hot 100 for her song ‘’Free Mind’. Notably, the lass has been mentioned by Beyonce as one of the songwriters in her upcoming album, ‘Renaissance’.

She is also featured in Black Panther’s trailer with her song which is a rendition of Bob Marley’s “No Woman, No Cry”. 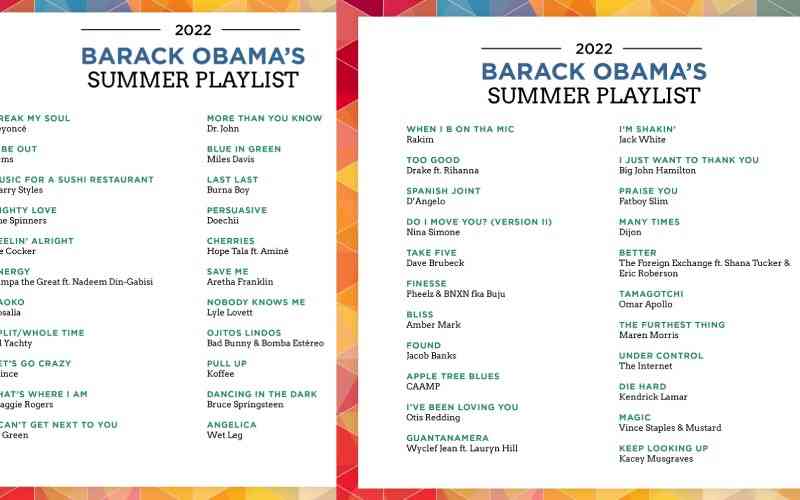 Grammy award winner Burna Boy’s global hit ‘Last Last’ also made the cut. The song has been topping charts worldwide having risen 14 places rising from the 86th spot to the 72nd position.

Beyoncé’s ‘Break my soul’, the number one song off her album, topped the list as far as the former President’s song liking is concerned. Tems’ ‘Vibe Out’ came second with Harry Styles coming in third with his ‘Music for a sushi restaurant’ song.