Performing during the rally held at a packed Bukhungu Stadium, the Rhumba queen sang Nakei Nairobi (I am on my way to Nairobi), much to the delight of the crowd who quickly whipped out their phones to capture the moment.

She thanked Odinga and Karua for the opportunity and prayed for God’s blessings over their lives. 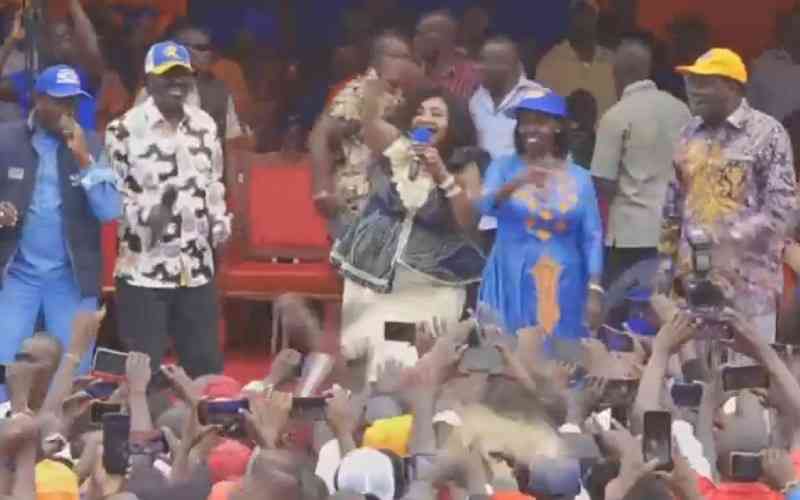 “Thank you very much Baba…Mungu akubariki…thank you Mama (Karua),” she said as she handed back the programme to the Azimio team.

Earlier this week, M’bilia Bel also made an appearance at an Azimio rally in Nyeri where she performed the same song.

A video captured at the event showed Raila inviting her to the podium to address his supporters.

During her short speech, she urged the crowd to elect Odinga as the fifth President, pledging to support him and Karua.

Born Marie Claire Mboya Moseka, multiple award-winning musician 66-year-old Mbilia Bel was born, raised and schooled in DRC Congo. She quit school at a tender age in 1977 due to her passion for music.

Years later, Mbilia who was determined to succeed where her predecessors had failed, inspired and mentored by two of Congo’s best artistes, the late Pascal Emmanuel Sinamoy popularity known as Tabuley Roserou, founder and bandleader of Afrisa International, alongside Niko Kasanda and Sama Nguana.

Mbilia began her music career under Sama Nguana, before moving to Tabuley’s Afrisa International, bursting into the limelight. Tabuley was to later become her first husband. She became the first African female musician to be crowned with the prestigious title of transcontinental diva.

The mother of one, who lists Kenya among her favourite destinations having staged several major concerts here in the past, promises to keep coming back.