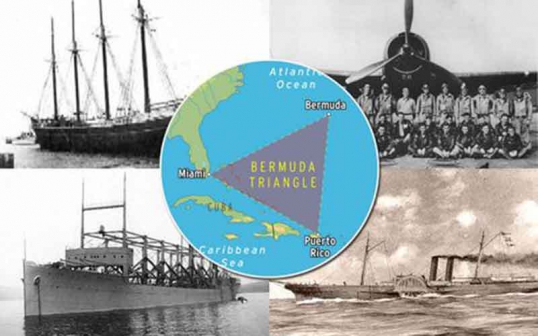 More than 300 ships including American cargo ship Cyclops are believed to have vanished in the Bermuda Triangle as well as several planes, but their wreckages are still to be found beneath the sea The area, branded 'Isle of the Devil' is shrouded in mystery

It is the place where ships, people and planes simply disappear.

The Bermuda Triangle is believed to have claimed more than 300 ships in its murky waters - including the immense US cargo ship Cyclops - as well as up to 75 aircraft.

No one knows exactly why the Bermuda Triangle causes these crafts to disappear - and many of the wrecks have never been recovered.

The area is steeped in mystery and even the Mary Celeste - the mystery ship found adrift without a single member of crew on board years after going missing - is believed to have got entangled in this dangerous web.

Some claim the disappearances in this area of the Atlantic Ocean, branded 'Isle of the Devil', are caused by huge freak waves, swallowing up everything in their path - while others point to the legends of ferociously strong whirlpools, mercilessly sucking down ships that get caught in them.

A documentary has attempted to investigate the mystery of the Bermuda Triangle, which covers a huge - and loosely defined - 270,000 square mile section between Bermuda, Florida and Puerto Rico and attempt to solve some of the mysteries of the missing objects.

On March 4, 1918, the USS Cyclops was last seen as it sailed towards the Bermuda Triangle carrying more than 10,000 tonnes of manganese ore, supplying fuel to the American fleet.

But the ship, and the 309 crew on board, suddenly vanished without a trace.

No distress call is believed to have been made and Cyclops is thought to have been sailing through the Bermuda Triangle on a relatively calm day.

There are numerous theories about what may have happened to Cyclops - including that it could have been overtaken by pirates, targeted by German submarines or simply overwhelmed by a giant octopus.

Two of the Cyclops' sister ships are believed to also have vanished in the same area.

Dive teams today are still searching for the wreckage beneath the ocean.

Cyclops was known for its tendency to roll, and some believe it could have met its peril if it was overcome by a huge wave, caused by the terrific storms known in the area.

These may have occurred because of the movement of tectonic plates beneath the Bermuda Triangle.

It is feared that here, deep beneath the surface, the movement of tectonic plates could trigger an underwater volcano causing immense destructive waves that could easily overwhelm a boat like Cyclops, and possibly even cause a devastating tsunami.

On December 5, 1945, five Avenger torpedo bombers took off from Fort Lauderdale air station in Florida. Flight 19 was a routine navigation training mission across the Florida Coast, with experienced Lieutenant Charles Taylor in command.

Midway through the mission, Taylor reported trouble with his compasses and deteriorating weather conditions.

A Martin Mariner flying boat was sent out to find Flight 19 and bring the 14 airmen on the five planes home - but after sending out one message it also disappeared and was never heard from again.

At the time, there were reports of a mid-air explosion around half an hour after Flight 19 took off.

But no evidence of the wreckage of Flight 19 or the Mariner were ever recovered. All 14 crew from Flight 19 and 13 on the Martin Mariner Flying Boat were never seen again.

Explanations for their disappearance have varied from theories of electromagnetic fog to alien abduction.

The Constellation was a four-mast ship, originally built in 1918. It was completely rebuilt and modernised in the 1930s - equipped with electricity and refrigeration.

However, due to the demand for ships during World War Two Constellation was turned back into a cargo ship. It was in 1943 when Constellation was en route from New York to Venezuela that it got caught in storms and began to be overcome with water.

The crew worked hard to pump Constellation free of water, but as their efforts failed the captain decided to stop close to Bermuda.

Constellation got drawn by a strong current into the murky waters of the Bermuda Triangle where the ship is believed to have hit a reef, causing it to split apart and sink to the ocean's depths on July 30, 1942.

A 236ft long paddle steamer, Montana was intended for use during the American Civil War of the 1860s.

The ship set out to travel from England to America carrying cargo.

However, when the captain tried to steer out of stormy conditions, the ship hit a reef. This ended up being disastrous and sent the ship to the bottom of the sea bed.

In 2015 cargo ship El Faro got caught up in a hurricane off the south coast of the Bahamas.

It went missing with all 33 crew, mostly American, still on board.

Some have questioned why the captain would have steered the ship towards the Bermuda Triangle, given the notorious weather and sea conditions there.

The wreckage of the ship was found around a month later 15,000ft beneath the sea.

'Draining the Bermuda Triangle’, a documentary which is being broadcast follows teams as they attempt to investigate the deadly vortex, using sonar mapping to 'drain' and create a picture of the base of this section of the ocean that has been shrouded in mystery for centuries.

Sonar mapping fires sound waves at the ocean floor which then send signals back so a picture of the shape and depth of the land beneath can be created. The technique has revealed that Bermuda itself sits on top of an immense sea mountain, 4,000 metres high and marooned in the middle of the Atlantic Ocean.

It is thought this mountain was formed after a volcanic eruption took place in the earliest phase of the development of the Atlantic, the volcano growing bigger and bigger until it towered above the ocean's surface.

When the volcano became extinct 30 million years ago, wind and rain eroded it down to a flat plateau, and as sea levels rose following the Ice Age, Bermuda was left as a small island atop an isolated sea mountain.

Sonar mapping shows that Bermuda is now surrounded by reefs which have evolved to become a deadly facet of the Triangle. These reefs have developed to become "boilers or breakers," formed by the accumulation of rocky algae and the shells of millions of tiny molluscs. As these fuse together and accumulate the formations develop into huge limestone structures which can grow up to 12 metres from the sea bed and sometimes break the surface at low tide.

Breakers are harder than the surrounding rock and often sharp - able to puncture a ship and cause it to sink in seconds.

They are also incredibly difficult to spot, making them particularly deadly.

Struan Smith, of the natural history museum in Bermuda, says: "They are more visible when there are waves during storms. The breakers are at their most dangerous on a flat calm day because they cannot be seen at all."

Investigating deposits on the sea bed, the team also find traces of methane hydrate - formed when organic material from the surface sinks and decays. Any major disruption can dislodge methane hydrate to release and force it to travel up the surface as gas, creating sink holes which have been reported in the Bermuda Triangle.

Another theory about the deadliness of the Bermuda Triangle lies in theories of its strong whirlpools.

Tom Iliffe, professor of marine biology, is seen exploring sinkholes including the Blue hole on Long Island in the Bahamas. Here, at the world's second deepest known salt water hole, whirlpools are evident and as Tom dives he finds immense tunnels with a powerful suction that could potentially be responsible for pulling huge items beneath the surface.

These sinkholes are believed to have been formed when sea levels were lower and acidic rainwater eroded away holes in the limestone, before their ceilings would collapse - leaving large gaping chasms that would create a bottle shape.

Scientists recently claimed hexagonal clouds in the region of the deadly triangle create terrifying 170mph winds. It is believed these deadly blasts of air can flip over ships and bring crashing into the ocean.

Others point to the location of the triangle as a reason for its problems. Located in the middle of the Atlantic the Bermuda Triangle is at the epicentre of weather activity - a place where hurricanes, equatorial storms, and storms off the coast of Mexico converge to create high winds and a turbulent sea with freak waves.