The next Commando? Arnold Schwarzenegger's son the spitting image of ‘The Terminator’ star 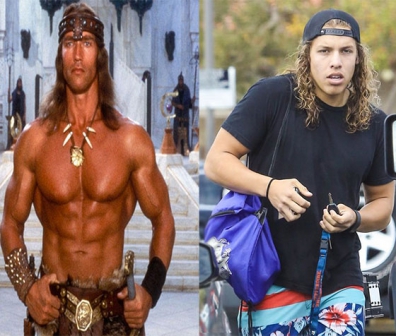 Teenager Joseph - who was born after Arnie had an affair with his housemaid Mildred Baena - is the illegitimate son of the action movie legend, and it's clear he takes after his dad.

He is the spitting image of a young Schwarzenegger, and put his bulging muscles on show as he ran some errands looking ready for a trip to the beach.

He was spotted in a pair of tropical board shorts, a plain black t-shirt and a hat covering his long, wavy hair, which is a similar style to his dad's early do.

Joseph is built the same as Arnie and looks a lot like his dad in promotional shots for his starring role in 1982 movie, Conan the Destroyer (Minus the body paint).

Four years after Arnold admitted to fathering a love child he opened up about his secret son.

In an interview with SiriusXM host Howard Stern, the Terminator star described Joseph as "fantastic".

Arnold added: "It was tough for everybody. But it has happened and now we have to figure it out, right?"

Gunn's new DC slate features Superman, Supergirl and Batman
News
By AP
24m ago
Will Smith, Martin Lawrence reteaming for 'Bad Boys' sequel
News
By AP
40m ago
Kenya's mitumba make it to Paris Haute Couture Fashion Week
News
By Peter Muiruri
16h ago
Bien explains why Chiki chased fan who was grinding on him
News
By Vincent Kejitan
17h ago
Tiger on the loose in South Africa successfully captured
News
By AP
19h ago
.