Meet The Man Who Ruled Kenya For Six Hours 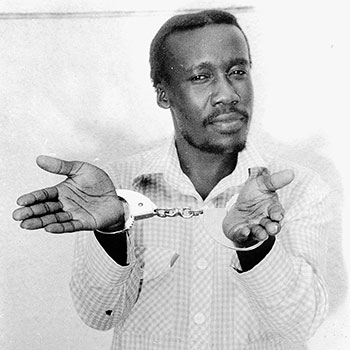 As you all know one abortive coup attempt by junior officers in the Kenya Air Force changed Kenya, irrevocably, from August 1, 1982.

For 24 years, Kenya became a near police state. Today, you can call President Uhuru Kenyatta Uhunye or Kamwana (young man) as residents of Gatundu South prefer to call him, and no one gives a hoot.

After the coup, you could only whisper the President’s name before wheeling your politically oppressed neck to check out any hovering undercover cops. Getting a passport meant brandishing a Kanu card, preferably one of ‘Life Membership’. Every estate had Kanu Youth Wingers. They wore red shirts and were terror personified.

There was Jeshi La Mzee too. The DC and DO were more powerful than the local MP then. You could be arrested and detained incommunicado for having; you can’t believe this, a map of China! Whether the map taught the holder the ‘Art of War’ is neither here nor in Guanghzou.

The single finger became a salute of loyalty, reggae music was banned for a decade after soldiers drove in streets of Nairobi blaring reggae songs of Jimmy Cliff and Bob Marley.

That was until Jeff Mwangemi revived it, roho juu, in the early ‘90s with Reggae Time, a show that aired on Tuesdays from 8am.

All these and many other worse happenings became a daily, rude reality because of one man: Hezekiah Ochuka Rabala, the Air Force Senior Private who masterminded the 1982 coup attempt. The 29-year-old was a Grade 1 – the second lowest rank in the military.

For starters, no Air Force anywhere in the world has ever overthrown a government single handedly. Kenya could have been the first. Indeed, only one Air Force officer in Africa managed the fete – Ghana’s Jerry Rawlings, President from 1993 to 2001.