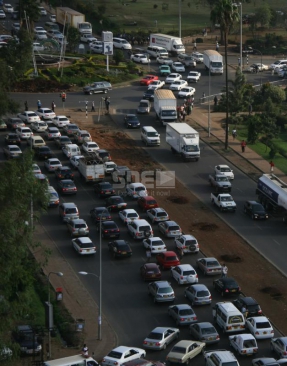 The number of vehicles in Nairobi alone is likely to be more than 1.35 million in 2030, going by the current rate of registration. The National Transport and Service Authority (NTSA) registers 7,000 vehicles monthly and 90,000 every year in Nairobi.

Nairobi Governor Evans Kidero said this could spell disaster if traffic is not addressed.

According to Kidero, the number of Public Service Vehicles (PSVs) have tremendously increased, causing congestion in the CBD.

Kidero who was speaking at the launch of a report to decongest the city, said: “We have stopped the licensing of any new PSV until the audit report showing where new vehicles are needed is out.”

The governor also said a new plan will be implemented to move bus terminals outside the city to help ease traffic.

He said the commuter service sector, thought profitable, was a source of traffic headache for the county, owing to poor management. The national and county governments have partnered to get rid of roundabouts and substitute them with signalised intersections to ease traffic jam.

The initiative will cost both governments Sh40 million in phase one, expected to be completed by the end of the year.

MDQ: Why I moved Blankets and Wine to Kasarani
Showbiz
By Boniface Mithika
8h ago
Why we put phones off when flying
Lifestyle
By Jayne Rose Gacheri
8h ago
Celebrities who have their body parts insured for millions
Showbiz
By Fay Ngina
8h ago
Man charged in Takeoff killing says he's innocent
News
By AP
13h ago
Man who shot Lady Gaga's dog walker gets 21 years in prison
News
By AP
13h ago
.