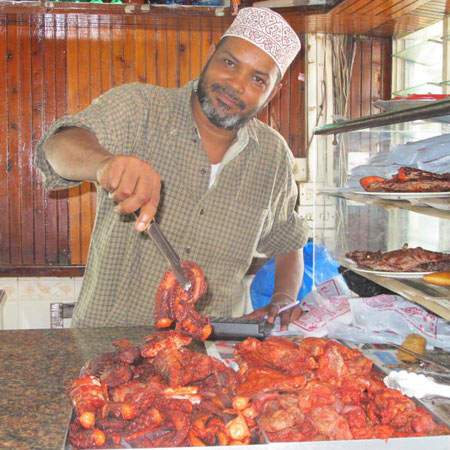 Mohamed Bongo explains a point during the interview at his open air pweza joint near the Likoni Ferry crossing channel. 2 Ali Wema (in white shirt) and a friend Musa Abdi enjoy a cup of octopus soup. 3 A fish dealer at Likoni displays a raw octopus to a customer. 4. Abdulhakim Salim, the manager of Al Mansura Hotel in Mtwapa arranging pieces of fried octopus meat on a display tray.5. George Kenga Kazungu (in black top), manager of Blues Fish Shop in Mtwapa and Ibrahim Kai (a worker at the shop) display a row octopus to a customer. 6. Pieces of deep fried octopus meat on display at an open air joint. PHOTOS AND CAPTIONS BY MWANGI MURAGURI

It is around 6.30 pm on the South Coast side of the Likoni Ferry crossing.

A bus driver beckons impatiently to his conductor who is enjoying a cup of octopus soup outside an open-air eatery.

The conductor repeatedly blows into his cup to cool the hot relish.

Eventually, he manages to down the contents of the cup in three big gulps, just in time to jump into the now moving bus heading to Mombasa Island on the waiting ferry.

Scores of men sit on the verandah of the joint sipping a purple-reddish drink from cups. Several others are standing waiting to be served.

Among this lot are two burly AP officers who are discussing a previous night’s encounter with robbers.

A few hours outside the eatery will see tens of men trooping to the joint for octopus meat and soup. Some motorists stop for take-aways of this popular delicacy.

This is the pweza (octopus) craze that has taken Mombasa and its environs by storm. Open-air joints and high-end restaurants which serve octopus soup and meat are recording increased sales, thanks to the belief that this dish is a virility booster and cure for impotence.

“Hii haibahatishi, bro. Ukiinywa lazima “shooting power” iongezeke (You cannot go wrong with octopus soup, my brother. If you drink this, you will definitely enhance your sex drive),” says Mohamed Bongo, who has been selling the soup at the open-air joint, near the ferry crossing for four years now.

Bongo says the demand for the cephalopod has been on a steady rise due to what he calls “awesome attributes” of the soup and meat.

Ali Wema, 44, a regular customer at Bongo’s joint says he has been eating octopus meat and drinking the soup since he was 20.

“This (soup) together with regular exercising gives you all the stamina you need. I’m talking from experience,” Wema says with a knowing smile.

A small cup of the soup goes for Sh5, while boiled or deep-fried octopus meat costs Sh15 a piece.

The demand cuts across social and age demographics and it is not uncommon to come across men in stylish suits and expensive cars stopping for their share of the soup.

“Not a day goes by without my ‘dose’ of the meat and soup,” says Sam Kang’ethe at a pweza joint in Mtwapa.

He says he was introduced to the delicacy by a colleague at his workplace, who openly boasted about his success with women after he started taking the soup.

“The guy had so many girlfriends who would visit him at work. He would brag that he was turning down offers as his past girlfriends kept spreading news of his ‘bedminton’ skills,” says Kang’ethe, as he bites into a chunk of deep-fried octopus.

The bank teller claims that three months after what he refers to as “pweza therapy,” his “body heat” has increased and he now rarely feels fatigued as was previously the case.

He says the soup is also a good antidote for hangover.

Kang’ethe goes on to say he has introduced several of his friends to the soup, including a doctor,  who apparently had confessed to him about his erectile dysfunction condition.

Abdulhakim Salim, the manager of Al Mansura Hotel at Mtwapa in Kilifi County, which has octopus meat on the menu, says a majority of his customers are those aged 40 years and above.

Salim describes the demand for the octopus meat as “very high” without disclosing the exact number of kilos he sells in a day.

What is more, unlike in the open-air joints where men seem to be the only customers, he says a good number of women enjoy the meat at his restaurant.

“I have heard lactating women claim that it increases milk production as well as body stamina,” Salim says.

“I drink two cups of the soup daily and I also eat a few pieces of the meat. I can confirm that it increases the urge for ‘the game’ as well as stamina,” he adds.