Celebrity reveals how he was asked for human sacrifice 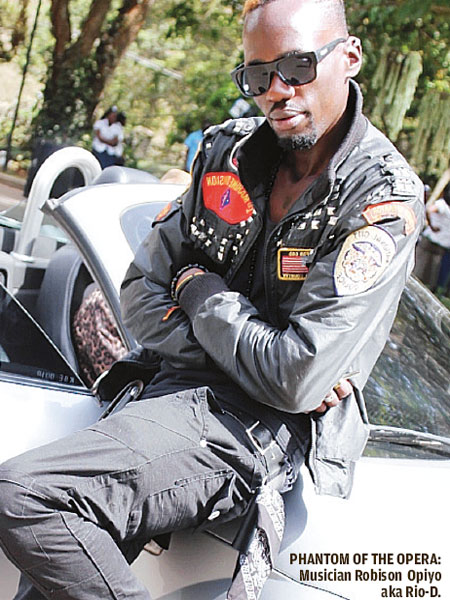 A local musician has told The Nairobian that he is on the run fearing for his life after he declined to give a human sacrifice of a close relative in exchange for money and fame.

“I am running away from Kenya in fear of my life,” the artiste known as Robinson Opiyo whose stage name is Rio-D said.

He says that his life took a strange turn two months ago when his friend, a fellow musician approached him with an offer that could catapult him to a world of fame and riches. “I was shocked when he told me that in their place they believe in Juju and various forms of witchcraft,” he narrates. “He insisted that I had to sacrifice ce a close relative and after that they could take a shower on a grave.”

Rio-D said that after the human sacrifice, he was to take body for a ritual and this could open doors of fame and richness. “He explained that after someone his killed and buried, you have to exhume the body or even get it from the mortuary. After getting the body, the remains are locked in a room in the house where no one can get access to it,” he told The Nairobian

recite some words to the body.  Once done, you leave the room and come back to find the room filled with money.”

Rio-D told The Nairobian that his friend  claimed most artistes in Kenya and Nigeria became rich from such money that they called “blood money.”

“I told him that I did not believe in that since I come from a Christian background and my mother is a church elder with the Seventh Day Adventist church,” he says. “When I refused,  he threatened to kick me out of the house we were living together,” he added.

“I escaped from his house when I discovered the meat in the flesh,” Rio-D says because in the entertainment industry,  celebs sacrifice close relatives for money and fame.

Previously, Rio-D recorded his music at Ogopa DJ’s before moving to MMG in June 2012.

As a musician, Rio-D says that he wants to “have sleek swag flow and personality to pump some style into the local industry.” The artiste is a man of many controversies.

In May 24, 2013, he was photographed carrying a police registered AK 47 rifle.  The   photo of him carrying a firearm was taken during a gun-dramatized video shoot of his song titled You Know-We Coming Through.

You Know-We Coming Through is a ‘diss track’ filled with lewd lyrics hitting upcoming rappers that Rio-D believes have beef with him. In January 2013, he parted ways with his mentor CMB Prezzo and moved on to work with co-rapper Lyon Cash.

He says he first met his friend at a recording house. “I directed his video, and he was impressed by it. He requested that we form a music group as a platform to  penetrate his music in Kenya. Further,  he was looking for someone who could do Kiswahili chorus lines,” said Rio-D.

“I told him I had an idea for a song, but I did not have the cash to record the track. He offered to pay at Grandpa Records,” he added.

The two later moved in together in Donholm.

Rio-D says that he started suspecting something was wrong when a fellow musician pointed out to him that there was something fishy about his friend. Things took a twist when his friend demanded he (Rio-D) to offer human sacrifice. Rio-D claims the musician who is Nigerian  dates wives of powerful politicians, ministers, businessmen ministers and MPs – women high in the corporate world.

The rich women are said to have bought him a car, paid his rent and maintained the luxurious life of the former hairdresser.