Diamond Platnumz surrenders himself to police, walks out after paying a fine 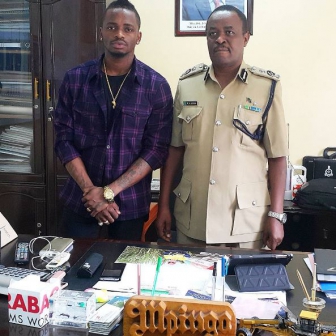 Diamond was summoned after a video surfaced of him driving without a safety belt. In the clip he is also seen letting go of the steering wheel and dancing while the vehicle was in motion.

The ‘Marry You’ star had to part with a fine and a warning message to the Tanzanian public urging them to remember road safety regulations.

But this is not his first brush with the law. Reports have it that the Bongo’s music big wig has been summoned by police over suspected drug trafficking alongside other celebrities among them Rehema Chalamila famously referred to as Ray C, former BBA winner Idris Sultan, singer Nay wa Mitego and MP Azan Zungu.

Prior to his summon his ex-girlfriend model Wema Sepetu was last Friday, summoned and arrested over drug trafficking allegations.

Sepetu was among a host of celebrities who were frog-matched to police cells as Tanzanian authorities continue a crackdown on drug trafficking and abuse in the country. Investigations are still underway.

Next article
Light moments as Kenya goes to the polls

Next article
Crystal Asige: My nomination is a win for Persons Living With Disabilities

Premium
Edna Clarke: The untold story of ties that bind Uhuru Kenyatta to the UK
Features
By Standard Reporter
8h ago
No weapon formed against us shall prosper - Wajackoyah's wife Meller Luchiri
News
By Fay Ngina
9h ago
Light moments as Kenya goes to the polls
African News
By Kirsten Kanja
10h ago
Celebs in business: From Bien's new club to Moya David's beauty spa
Features
By Kirsten Kanja
13h ago
Tiny African kingdom has skiing as Europe sweats summer heat
News
By AP
Aug. 8, 2022
.