Worry more about your own legacy, if you got any at all - President Kagame tells Kenyan journalist

President Paul Kagame has seemingly gone all ‘karate’ on a Kenyan journalist on Twitter with a social media response telling him “to worry about his own legacy.”

The Kenyan journalist got the ‘angry’ response after commenting on President Kagame’s Twitter post following the president's post to his legal team and friends.  Kagame’s initial post read:  Many thanks to the tireless legal team, friends and the unbreakable Rwandan spirit....!!!

Levi Kones who works for local media house commented on the post advising the Kagame not to be a president for life:  @PaulKagame I really hope sir, you will not ruin your legacy by being President for life.

Seemingly irritated by the comment, the response from Kagame Twitter handle advised him to mind his own legacy,” if he had any”.

“Worry more about your own legacy ...if you got any at all to think about!! “

Known for his calm talk, Kagame’s comeback at the journalist elicited response on Twitter as some pointed out that his words might have gone a little over board.

And that is how #SomeonetellKagame was born.

Batuz pisces ‏@drizzylowe : Enyewe #kot sometimes we should mind our own business. Rwandans voted for his third term. Who are we to say no #SomeoneTellKagame

mark anambo ‏@markanambo : As a member of team mafisi we will only accept an apology delivered by your daughter #SomeoneTellKagame

His countrymen however, came to Kagame’s rescue  defending his legacy: @levikones don't worry about our leader mind yours. His legacy is self explanatory. For us #Rwandans is the Greatest. 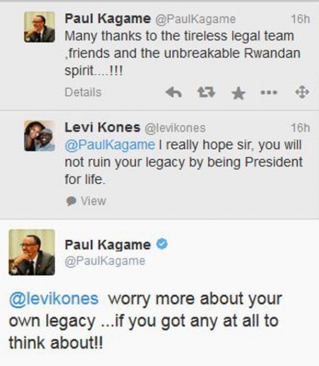