Magoha: Why government is not in a hurry to reopen schools yet 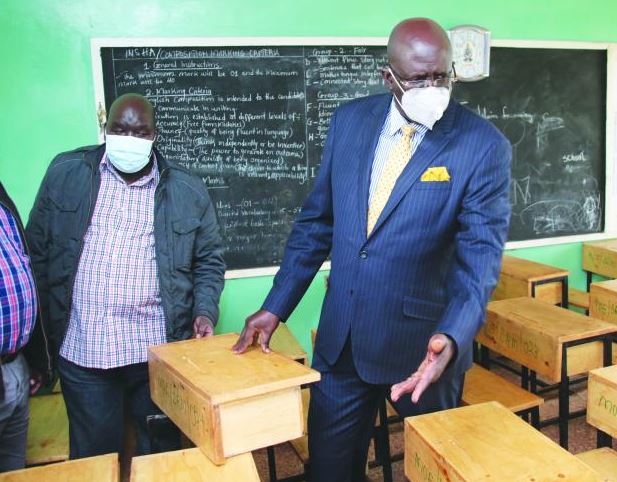 Education Cabinet Secretary George Magoha has said the Cabinet was yet to consider the decision to reopen schools for other classes.

Speaking at Dr Muthiora Primary School in Dagoretti constituency where he went to assess the status of supplied desks, Magoha (pictured) said the government was not in a hurry to execute the phased reopening of schools, noting the rate of Covid-19 infections was spiking.

“I want to clarify that the government has not authorised further opening of other classes, both in public, private and international schools. That decision is yet to be considered by the Cabinet and when we get to the answer, the nation shall be told,” Magoha said.

He added: “For now, we are not also in a hurry as we can all see that Covid-19 rates are spiking, so let nobody attempt to be smart to open schools for certain classes. Those classes that were not opened before must remain closed until the government advises otherwise.” He said for those who do not abide, there shall be consequences.

At the school, Magoha found that some of the desks produced were substandard. He put the carpenters in charge to task and gave them a week to ensure the desks were produced to the required standards.

“These inspections will be extremely important because from what we have seen here, this matter has been taken a little carelessly.

The government is not going to allow that to happen; we shall ensure desks made are up to expected standards for our children and that they are delivered,” Magoha said.

Magoha: Schools reopening very soon, the Government is not ready

Are Schools safe? Concerns over the safety of learners as schools expected to reopen in October

Communications expert Kentice Tikolo is the person who was tasked to ensure Football Kenya Federation (FKF) elections went on as planned...

By Shadrack Mitty | 8 hours ago

Time to embrace the bottom-up approach to education reforms
;
Feedback