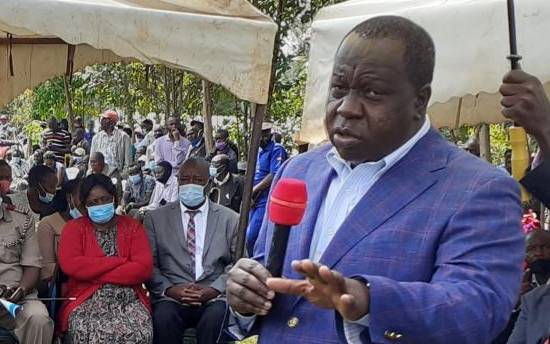 Preparations for the reopening of schools starts today as officials of the ministries of Education and Interior meet to layout strategies.

Cabinet Secretaries Fred Matiang’i (Interior) (pictured) and George Magoha of Education will meet national and regional officials to assess the status of schools ahead of the planned January 2021 reopening.

The government has set aside Sh1.9 billion under the Economic Stimulus Programme for the supply of special locally assembled desks to public primary and secondary schools.

Of this, Sh1 billion will be used to make desks for secondary schools.

The remaining Sh900 million will cater for desks for primary schools.

Magoha said the government developed a prototype of the special desks compliant with the Covid-19 protocols of keeping safe social distance. The desks will be unveiled today.

He maintained that all schools will reopen in January and accused the media of portraying him as indecisive.

He said the confusion on the date schools will re-open was created by the media, adding that the press twisted his words to depict him as someone who flip-flops.

He said learning will resume when the Covid-19 infection rate drops to five per cent and remain so for more than 14 days, and learning institution meet safety-health conditions.

“We will not open (schools) in November. The fourth estate has continued religiously to write what I have not said. The opening of school will be in January 2021, but it will also depend on how the virus behaves and the ability of the schools to comply with some things,” he said.

Speaking in Kilifi on Tuesday, Magoha said the regional officials who will attend today’s meting will be required to have the special desks within their jurisdictions. He said some 800 sample desks have already been manufactured and each will cost Sh3,800.

Sources said the design prototypes will be available at the county commissioners, county directors of Education and their sub-county offices.

President Uhuru Kenyatta had directed that the new desks be manufactured by local artisans and delivered to schools as part of measures to boost institutions’ infrastructure in readiness for reopening.

The Standard has established that the Ministry of Education and that of Interior, through their grassroots structures, will adopt a model similar to the one deployed in the Kazi Mtaani Initiative to identify and pay qualifying suppliers.

Finer details show that interested local jua kali workshops, artisans or small and medium-sized enterprises involved in carpentry at the sub-county level will be required to register for the jobs.

The unveiling of the special desks will mark a major milestone in preparations for opening basic education institutions.

Magoha has on many occasions admitted that the elephant in the room is how to ensure social distance is maintained in schools. Part of the proposed solutions was use of face masks, which many stakeholders said would be hard to enforce among primary and secondary school children.

Speaking after touring the Kitui County Textile Centre, a garment factory involved in mass production of face masks, Magoha said implementing the social distancing protocol in schools would be a challenge and will require distribution of masks. “This is going to be a challenge. The more reason we should make sure masks are made of the right material and that they are of good size,” said Magoha.

The CS last week announced the government would have to buy re-washable face masks at a cost of Sh35 a pair, which can be used for six months.

“If one expects the national government to buy the masks we shall require a billion shillings,” said Magoha.

The CS said this would require a joint approach by the national and county governments and other stakeholders.

With plans to have new desks underway, focus will now shift to expanding spaces that would accommodate learners. TSC is hiring 10,000 teachers but these will not be enough to cater for the increased classes.

The government is expected to release Sh15.4 billion to help public schools make necessary preparations ahead of January.

By Nehemiah Okwembah | 4 hours ago

By Kariuki Waihenya | 1 day ago

TSC all set to roll out new refresher courses
Feedback