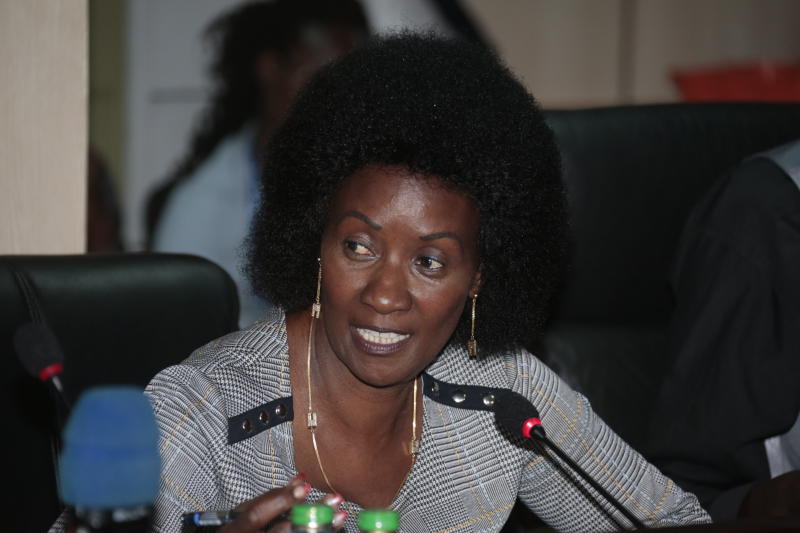 Teachers Service Commission  CEO Dr Nancy Macharia’s (pictured) term ended on Tuesday amid uncertainty on whether it will be renewed for another five years.

The Law Society of Kenya (LSK) wrote to the Attorney General, Justice Paul Kihara, warning of the renewal of Ms Macharia’s term as Secretary and CEO without subjecting the position to a process of competitive recruitment.

Though the term is renewable for another five years, LSK says the position should be subjected to the competitive process.

TSC Act requires that whenever a vacancy arises in the commission, it shall, by notice in the Gazette, declare a vacancy and constitute a selection panel for the purpose of selecting suitable candidates for appointment as the chairperson or member of the commission.

“While the Act provides that the Secretary is eligible for re-appointment after serving for five years, the requirement for competitive recruitment demands that once the term of office for the Secretary expires, the position must be filled by competitive recruitment each time,” read the letter dated June 29, 2020, signed by LSK President, Nelson Havi.

Macharia's term of office was characterized by strong-arm tactics especially in TSC dealings with Kenya National Union of Teachers (KNUT). It is during her term that KNUT Secretary General Wilson Sossion was de-registered as a teacher

Last year, Macharia gave the 60-year-old union a notice of revocation of the all crucial recognition agreement. This happened shortly after the employer inspired a mass exodus of teachers from KNUT to rival Kenya Union of Post Primary Education Teachers (KUPPET).

On Tuesday, Havi claimed that LSK had received information that there are plans to renew Macharia’s term.

“The information we have is that there are plans to renew her contract for a further five years, without subjecting the position to a process of competitive recruitment,” the letter read.

Havi said the Constitution of Kenya establishes that TSC is to be comprised of at least three, but not more than nine members, identified and recommended for appointment in a manner prescribed by national legislation.

It added: “TSC Act provides a detailed procedure for the appointment of the Secretary, providing that the appointment to the Commission shall be through a competitive recruitment process.”

LSK urged the Attorney General to advise TSC appropriately on the correct legal procedure for the appointment of the Secretary now that the position was about to fall vacant.

LSK noted that such advice would ensure that whatever decisions are made are accountable, above-board and in compliance with the constitution and law.

In their view, LSK it is likely that a failure to subject the position of the TSC Secretary to competitive recruitment will open yet another line of controversy with the possibility of litigation, should the proper position be ignored.

“It is our hope that whatever decision is reached in relation to this matter will be in accordance with the law and informed by the prevailing national context which includes an unresolved crisis over the appointment of judges, an emerging crisis over perceptions of declining diversity in the composition of persons who hold key positions in the public administration,” the letter read.

Macharia was appointed TSC Secretary and CEO in June 2015. Her appointment followed the conclusion of a competitive recruitment process that started on May 1, 2015, when the position was advertised and attracted 69 applicants from which four were shortlisted.

Yesterday, TSC Communications Director Beatrice Wababu, said the CEO could not speak on her term and would probably have had something to say if the letter was copied to their office.

Two teachers’ unions also distanced themselves from the letter saying it has nothing to do with them.

Kenya National Union of Teachers (KNUT) Secretary-General, Wilson Sossion said even though the issues raised by LSK are pertinent, the Union will allow the Attorney General to respond to the matter first.

“The issues raised by LSK are pertinent but as a union, we wish to let the government through the Attorney General respond to the matter first,” Sossion said.

KUPPET Secretary General Akelo Misori said unless the letter has anything to do with their Union, they wished not to make a statement on the matter.

“We do not deal with individuals, we deal with TSC as a body, we have no business with any letter from the LSK unless it is written to KUPPET,” Misori said.

By Victor Nzuma | 2 days ago

Who gets honorary doctorates, and what that says about varsities
;
Feedback