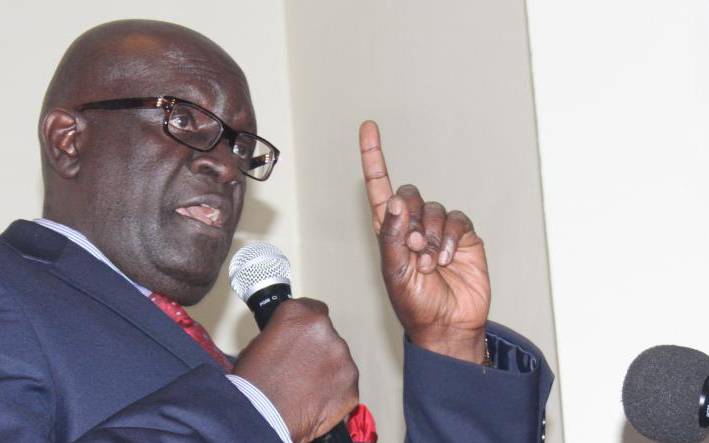 The Cabinet Secretary for Education Prof George Magoha (pictured) is a man who rarely laughs. And even if he responds to amusement, he does so by just a simple grin.

Conversely, when he speaks, his audience can never be bored. He bombards them with comical statements sending them into stitches at the stroke of every sentence.

This was the same atmosphere on Tuesday when Prof Magoha took to the podium to address the annual 15th Kenya Primary Schools Head Teachers Association (KEPSHA) conference in Mombasa.

The CS took to the podium to make his speech after his Principal Secretary Dr Belio Kipsang had made his remarks.

The miseducation of Kenyans obsessed with national schools

He commenced it with a punchy line drawing the attention of the teachers as he made headway to address them on the Kenya Certificate of Primary education and the Form One selection criteria.

He stated that the recent students’ placement was done as required by the Ministry of Education guidelines and that there were no anomalies.

“Some of the children crying foul in the just concluded students’ Form One placement were actually placed on their first choices. If you put Mangu at number three for instance, what the hell do you think you are doing? If you want to go there, put it as number one,” he said.

“If you are not so sure of yourself then we shall give you the school you have selected. You can go and crosscheck with our data. It is available.”

He then drifted to praising the KCPE exercise, urging students and schools which may have underperformed not to lose hope.

Amidst laughter from the school heads, Magoha said: “Who has told you that if you have 190 marks, then you have nothing to offer?” This is why children are committing suicide.  200 is a very good mark. I have never seen schools with a mean grade of 200 marks celebrating.”

He exuded confidence in the examination process and stated that the pattern could even tell that it passed the integrity test.

“You have allowed children to use their brains same way I used mine 50 years ago to study the history of Napoleon Bonaparte and I can describe for you the history from where he was born in 1769 in the island of Corsica,” he said.

“I am so touched that as far as CBC is concerned, you are doing exactly what was done to me during my time. So you should celebrate yourself.”

Prof Magoha then took a swipe at parents by accusing them of neglecting parental roles by ‘not starting to teach from their house.’

“The role of parenting has reduced by 80 per cent. With all due respect, our parents have become as animals. You produce children and then wait and don’t train them. They can’t flush toilets, they can’t clean their backs because there is someone doing it for them, then you later throw them to teachers,” he posed amid laughter.

“Allow them to clean the toilet, to clean the house, to collect the taka taka (litter). Let us not burden the teachers with everything.”

He reminisced his past tours where he would surprise schools with morning impromptu visits to investigate status of teaching in the country.

“I have been to primary schools and I always come unannounced because when I announce I find all the Duales of this world with a battery of everybody waiting for me. So I sneak quietly and go to a school in any part of the country. In 98 per cent of the time I found teachers in class,” said Magoha, as teachers clapped.

In the wake of jostling for opportunities in secondary schools, CS Magoha persuaded the headteachers to be at the forefront of helping needy students. The nostalgic Magoha narrated how school heads in the past had the tendency of shortchanging needy students on sponsorships and scholarships.

“If you do that, you’ll not go to heaven. You’ll see me on this side of heaven na wewe utakuwa pande gani (and which side will you be?)…I will go to heaven. I know it because I live my word,” he said.

For a man who is thought to be obsessed with nothing but academic excellence, CS Magoha surprised the teachers when he appeared to bash those who pursue academics and end up complaining of joblessness.

He said: “Why should you be stupid to have 50 certificates saying you went to university and is jobless? You’re a fool.”

Magoha ended his remarks emphasising on the need for satisfaction with a brief comical narrative about his life as a young boy and how his mother fed them.

“I survived on Sukuma wiki and ugali, if you were lucky you would get some little omena. And my mother would put a little in the centre and we are ten people. So if you were lucky enough you dip your ugali in the soup. But before you would do it the elder ones would have cleared it,” he stated.

Intellectually gifted children need support of everyone to realise their potential

By Amos Kareithi | 1 day ago