Kiraitu vows to soldier on despite 'barking dogs' 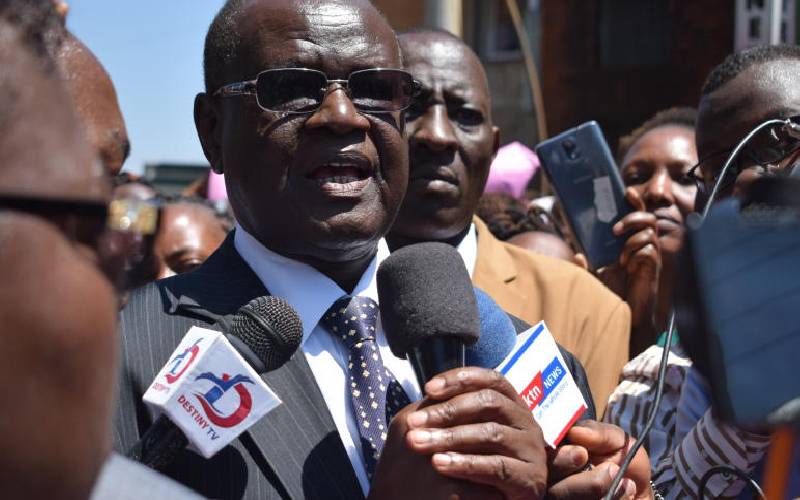 Meru Governor Kiraitu Murungi (pictured) has told off critics of his development record, saying he will not be distracted.

Speaking in the wake of a recent censure by county leaders including former Governor Peter Munya, Senator Mithika Linturi and Eala MP Mpuru Aburi, the governor said he has done well in his first two years..

“Let us be given time to work since we have been in government for barely two years. The impact on the ground is being felt,” Kiraitu said at Chugu and Munithu villages in Nyaki East ward, North Imenti.

The governor faulted critics from the former regime over his development record, adding that while the former regime constructed only 100 ECDE classes in five years, his government has already done 112 in under two years.

“Naysayers will not stop our vision. The dogs will continue barking from roadsides but my development caravan will keep moving,” he said.

Kiraitu added that his administration is constructing classes at a cheaper cost of Sh750,000 as opposed to the Sh1.25 million per classroom by the former county government.

The governor said his government drilled 100 boreholes in a year and plan to complete another 50 by next month.

He said ECDE learners have increased by 6,500 due to the free milk programme.

“We have saved the cost of constructing of ECDE classes by Sh500,000 since we are using cheaper, yet quality new building technology."

Marianne Kitany went "to lure Hon. Linturi", she succeeded beyond her wildest imagination

The senator has diabetes and is also suffering from high blood pressure but had not taken any medicine since he was arrested.

By Philip Muasya and Stephen Nzioka | 4 days ago