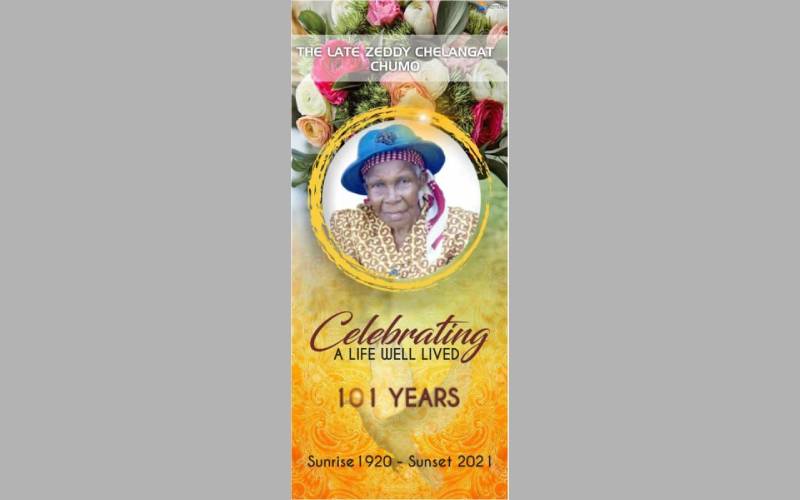 A family from Kapetebeswet in Bomet is trying to come to terms with having buried the wrong body.

Granny Zeddy Chumo, 101, was buried in place of Grace Tabsabei.

A week after the burial, a family from Marumbasi in Bureti county showed up at AIC Litein Mission hospital mortuary in preparation to pick Chumo's body only to be presented with that of Tabsabei.

Chumo's grandson Stephen Kirui said the development disrupted the burial that had been scheduled for yesterday.

"All along we have been busy with the burial knowing the body of our grandmother Chumo is at the hospital mortuary only for the mortician to present the body of an old lady who is a stranger to us," he said.

According to Kirui, they took the body of their grandmother to the mortuary on December 7.

The same day, Tabsabei, who had been admitted at the hospital, died and her body was taken to the mortuary.

Tabsabei's family spokesman Starnely Ruto said they were shocked on Friday to receive a call from the hospital informing them that they might have buried a different woman.

The family was asked to go back to the mortuary to identify the body.

"We have confirmed that we indeed buried the wrong person and that the body of Tabsabei is the one at the mortuary," he said.

Dr. Elijah Kerich, AIC Litein Mission hospital medical superintendent, said since the two bodies were taken to the mortuary almost at the same time, the name tags might have been mismatched.

"When Tabsabei's family members came to pick the body of their kin, they were convinced it was Chumo."

Dr Kerich added, "Though the men from Tabsabei side had doubts, they called four women who were close to the deceased who upon examining Chumo's body said it was indeed that of their relative."

Dr. Kerich said it wasn't until Chumo's relatives came to pick the body that they realised there had been a mistake.

Dr Kerich noted that the two women had other similarities, including skin colour and height and both were over 80 years old.

Dr. Kerich said the matter had been reported to Litein police station and that the court will have to issue an exhumation permit to allow both families to bury their real granny.

"We regret the unfortunate incident and the turmoil which has caused the families," he said.

The governor said his administration opened up over 3,000 kilometres of feeder roads across the county.

By Hellen Miseda | 5 hours ago

By Michael Saitoti | 5 hours ago