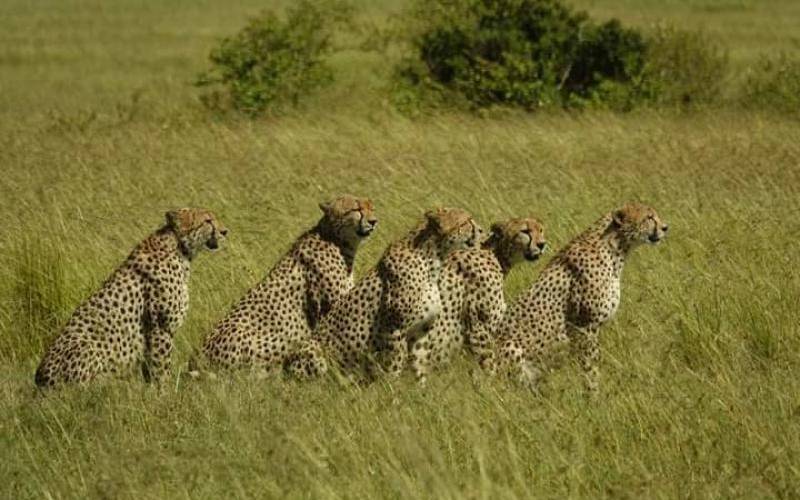 Hoping off a twin-rotter Air Kenya plane, I shook off the fright of the turbulence that hit us. The grass carpeted plains stretched out and met with the blue skies in the horizon.

As I am driven in the rutted tracks to the Kichwa Tembo Camp, I notice wisps of dust thrown up by four-wheel drives ferrying tourists on a game drive in the Masai Mara Game Reserve. Some Maasai morans are walking along the same road. The short journey is bone-jarring and the wind that hits your face causes little discomfort.

“Aren’t they afraid of the lions?” I ask the driver of the topless Land Rover. “Not really. There are no lions outside the game park though some could wander off and cause trouble, but that seldom happens,” he replies. I wasn’t convinced, but I took his answer for it.

Across the road, on the lush green vegetation, are a herd of zebras and warthogs. They don’t seem troubled by anything and just crane their necks as if to see who else has come to see them.

Later, after checking in, I sit out in the shade and watch the sun set amidst the melodious tunes of birds chirruping up the trees and the ruminating warthog. It was as if darkness was pushing away a reluctant sun and we all were mourning the death of daylight.

We file into the restaurant for dinner. The huge bonfire outside lifts the spirits. Across the fire, tourists chat on the happenings of the day.

“I saw a zebra, I saw a cheetah and a buffalo,” one says with glee. You can’t fail to notice the British accent. “I saw a lioness,” says another with a Spanish accent. Children run around the fire playing and singing.

Others like me, just look at the fire thinking about - God knows what - sipping a glass of Signore Giuseppe.

In the midst of the Masai Mara wilderness were couples on honeymoon, families on holiday. Morans sing and the tourists join in. Those seated take pictures.

I’m busy figuring out my assignment the next day, 20km away. Soon, housekeeping staff move around asking those who would like to have a call for a game drive at 5.30am. I weigh my options; between the warmth of my bed and the bone jarring trip on top of a Toyota Land Cruiser looking for game in the wilderness. It was the season of the wildebeest migration. With my eyes heavy with sleep, I confirm my interest in the morning drive.

This week the Masters returns to its traditional April time slot after an unprecedented November staging as a result of the Covid-19 pandemic in....