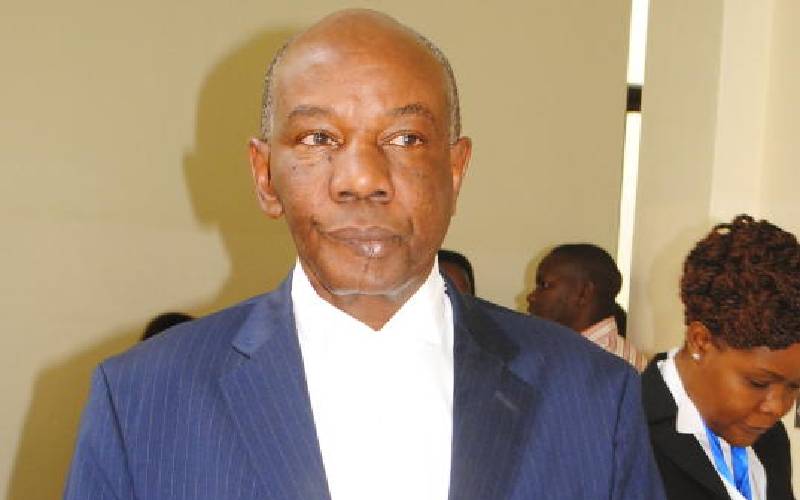 Senior Counsel Fredrick Ngatia (pictured) is a seasoned lawyer synonymous with some of the biggest and landmark cases in the country.

He has achieved top honours, accolades and almost everything a lawyer would wish to fulfill in a lifetime except being a judge. He is now seeking to be the country’s next Chief Justice and Judge of the Supreme Court.

On paper, Ngatia looks like the most qualified candidate for the CJ’s position given his seniority in terms of age, legal experience, academic qualifications, managerial skills, network and connection with the other arms of government.

This will, however, be proved practically when he appears before the Judicial Service Commission (JSC) on April 20 to be interviewed on his suitability to succeed retired Justice David Maraga.

Should he be successful in the interview, Ngatia will become the second CJ to be appointed from outside the Judiciary after Dr Willy Mutunga.

The 64-year-old senior counsel with two Masters degrees and an aggregate of 41 years of experience in the legal profession was ranked the top lawyer in dispute resolution by the Global Chambers in 2019, and is well remembered for arguing the case that resulted in the abolition of the mandatory death sentence.

According to the respected global firm which audits lawyers and law firms across the globe, Ngatia is the go-to person when you want your legal issues sorted.

“Fred Ngatia of Ngatia & Associates is a top litigator considered to be a heavy-hitter and the go-to advocate when you want to get things done. He produces brilliant legal arguments in court and is frequently instructed on public interest cases,” said the global firm.

He has been involved in almost all the groundbreaking cases at the Supreme Court, represented big companies, high-profile individuals and was the lead counsel for President Uhuru Kenyatta in 2013 and twice in 2017 when his election victory was challenged, winning twice and losing once.

Ngatia was admitted to the roll of advocates in 1980, a year after he graduated with a Bachelor of Law from the University of Nairobi.

He obtained his first Master of Law degree from London School of Economics in 1984, during which he carried out research on the boundary dispute between Kenya and Sudan, which culminated in the changing of the boundaries between the two countries to the current state.

He got his second Masters in Applied Philosophy and Ethics from Strathmore University in 2019 and did research on whether euthanasia should be administered by medical doctors. The thesis was aimed at helping superior courts reach a decision when faced with the question of ending someone’s life.

The senior counsel started his career as a State Counsel at the Attorney General’s office in 1980, but resigned after seven years to enter into private law practice.

He first started as a partner at Kagia and Ngatia Advocates but broke away in 1996 to start Ngatia and Associates, where he is the sole proprietor to date.

In 2015, Ngatia was appointed by former CJ Mutunga to help condemned prisoners serving death sentence and successfully argued the case which has seen more than 5,000 prisoners apply for re-sentencing after the court declared mandatory death sentence as unconstitutional.

His other outstanding case was in 2019 when he successfully argued on behalf of the Council of Governors over the dispute regarding the division of revenue.

Among his major writings that he submitted to support his application for the CJ and president of the Supreme Court is his thesis for his Masters at the London School of Economics on the legal difficulty of delimiting the Kenya/Sudan boundary.

A master of election petitions, he cited as his second example his submissions before the Supreme Court, which led to the nullification of the election of Wajir West MP over election malpractices in the 2017 elections.

Ngatia also presented the case where he represented an international firm over dispute with Kenya Bureau of Standards on inspection and testing of imported petroleum products and the dispute over printing of new currency notes, which he successfully argued on behalf of De La Rue International.

From his cited work, Ngatia passes as an all-round advocate with vast experience.

The most common contaminant was E. coli bacteria however known enteric pathogens such as Salmonella and Shigella were also isolated

A spot check by The Standard shows the gang issues receipts for the illegal levies every day.

By Eric Abuga and Edwin Nyarangi | 2 hours ago