Judiciary in crisis after judge orders Mwilu to step aside

The Judiciary has been thrown into a crisis after a judge temporarily stopped Deputy Chief Justice Philomena Mwilu from holding office.

“A conservatory order be and is hereby issued restraining Justice Mwilu’s continued occupation of the office of the DCJ, judge of the Supreme Court, member of the Judicial Service Commission and Judiciary Ombudsperson pending determination of the suit,” ruled Justice Otieno.

Justice Mwilu has been acting as the Chief Justice since December last year following the retirement of Justice David Maraga. The ruling means the Judiciary will not have a judge at the helm of the apex court during the period she will be barred from office.

Justice Otieno’s ruling will also bring operations at the Supreme Court to a halt, with several cases that had been lined up for hearing likely to be suspended for lack of quorum.

The Constitution sets the minimum quorum for a full hearing at the Supreme Court at five judges. With the retirement of justices Maraga and Jackton Ojwang’, and the suspension of Justice Mwilu, the court is left with only four judges who cannot sit as a full bench.

The ruling will, however, not affect the JSC’s operations with the body only requiring a minimum of six commissioners to conduct business. The commission currently has nine members in the absence of Justice Mwilu.

Mr Mbiti, in his petition filed through lawyer MD Maranya, is challenging the DCJ’s suitability to continue serving while facing a disciplinary case pending before the JSC.

He argued that as a State officer, Justice Mwilu should step aside to pave way for completion of the disciplinary proceedings like other State officers who have been barred from office for integrity issues, and only be allowed back if cleared.

“The fact that she is facing questions as to her integrity contravenes the high standards of integrity required for a person of her status. In prosecutions of State officers, the courts have unceasingly held that they be suspended from office pending conclusion of their cases,” said Mr Maranya.

He cited the cases of governors Moses Lenolkulal of Samburu, Okoth Obado of Migori, Ali Korane of Garissa, Muthomi Njuki of Tharaka Nithi, and former governors Mike Sonko of Nairobi and Ferdinand Waititu of Kiambu who were barred from accessing their offices after being charged with corruption.

Justice Mwilu’s woes began in August 2018 when she was taken to court by the Director of Public Prosecution (DPP) to face criminal charges of abuse of office, unlawful failure to pay taxes and forgery amounting to Sh80.7 million.

The DPP claimed that she used her office while serving as a Court of Appeal Judge in 2013 to obtain Sh12 million from Imperial Bank of Kenya, and conspired to execute a discharge for two parcels of land held as security for a loan of Sh60 million.

According to the charge sheet presented to court by the DPP, Mwilu was to face five additional counts of unlawful failure to pay taxes to the Kenya Revenue Authority totalling Sh9 million between December 2013 and December 2016.

In May 2019, five High Court judges–Hellen Omondi, Mumbi Ngugi, Francis Tuiyot, William Musyoka and Chacha Mwita–quashed the criminal case against Justice Mwilu on account that the evidence was obtained illegally. 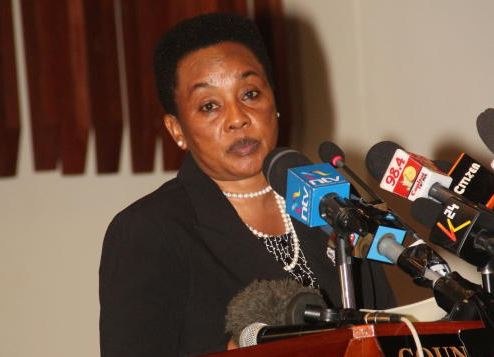 The judges, however, directed the DPP and the Director of Criminal Investigations (DCI) to file a complaint with the JSC, ruling that any case of misconduct against a judge committed in the course of official duty can only be referred to the commission.

The DPP and the DCI subsequently filed a disciplinary case against Mwilu (pictured) at the JSC, but she moved back to the High Court and obtained orders stopping the JSC from proceeding with the misconduct case. The suit is still pending determination before a five-judge bench at the High Court.

Maranya argued in this latest application that with Justice Mwilu’s integrity still on trial, she is not suitable to hold any State office or act as the CJ during the pendency of the case by the DPP and the DCI that seeks to remove her as the DCJ.

“She ought to step aside from all positions she is holding in the Judiciary. It is ironical that she continues to hold the position of Ombudsperson to hear disciplinary cases against other judicial officers while her own integrity has been put to question,” said Maranya.

He added that it is absurd for the DCJ to continue sitting at the JSC to make important decisions affecting the Judiciary, including disciplining other judges, when her own disciplinary case has not been concluded.

He said as a judge of the apex court, Justice Mwilu should exhibit high moral character, integrity and impartiality “but which she is lacking as a result of the allegations raised against her by the DPP and the DCI”.

“Justice Mwilu is a Kenyan before she is a DCJ and the moral probity required of her is just like that of any other Kenyan State officer. She ought not to enjoy preferential treatment because she is a judge and must be subjected to Chapter Six of the Constitution on integrity,” said Maranya.

He added that Justice Mwilu’s continued stay in the Judiciary “is bringing disrepute to the institution” and she must step aside to pave way for conclusion of the disciplinary cases.

Justice Otieno directed the petitioner to serve the DCJ forthwith and scheduled hearing for February 12.

Yesterday, Justice Mwilu’s lawyer, Nelson Havi, said the orders by the court have no effect as the law dictates that a judge can only be suspended if the JSC recommends their suspension to the President.

Mr Havi said the orders contradicted other orders issued by Justice Anthony Mrima who ruled two weeks ago that Justice Mwilu can continue serving as the acting Chief Justice even with the pending cases.

“First and foremost, a judge is appointed by the JSC and is only suspended by the decision of the President upon recommendation by the JSC. By that alone, a High Court judge has no powers to suspend another judge sitting before the Supreme Court,” Havi argued.

He continued: “The second issue is that the High Court absolved her in May 2019 and she served as a DCJ. What is the urgency in this case and that by Okiya Omtatah? They do not want her to act as a CJ? A similar claim was made before Justice Mrima and he ruled that she should continue to serve. We know who do not want her. We will on Monday go to court to have the order suspended.”

Leakey’s Auctioneers, one of the biggest in the country, has changed its trading name to Phillips International Auctioneers.

By Antony Gitonga and Joackim Bwana | 7 hours ago