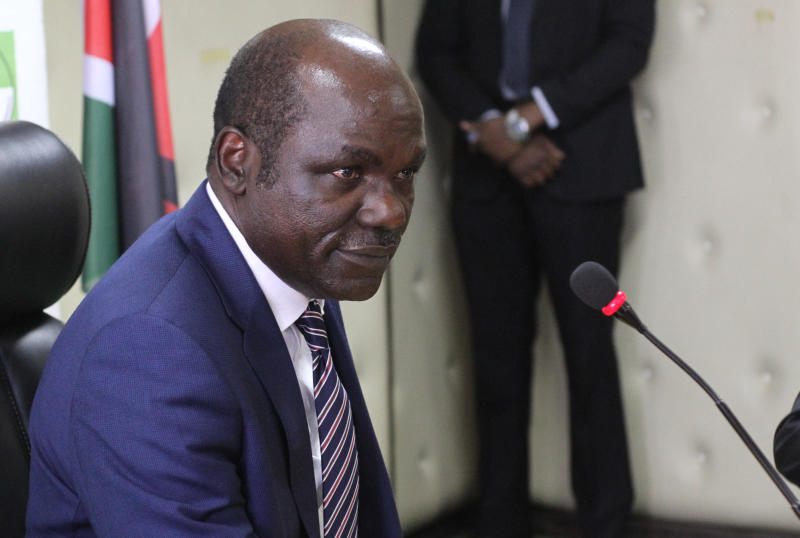 The Independent Electoral and Boundaries Commission (IEBC) is exploring options of conducting elections in future should Covid-19 persist.

With barely 23 months to the 2022 General Election, commission chairman Wafula Chebukati (pictured) revealed that they are developing new policy to conduct a referendum or hold elections.

“We shall give details on how to conduct safe elections in future upon seeking consent and approval of relevant executive and legislative organs,” he said.

Chebukati explained that coronavirus was a public health threat to future elections given that voters cast the ballot in polling stations.

The presence of thousands of voters and poll officials at polling stations is fertile ground for spread of the virus.

“These are some of the issues the commission is reviewing to suggest to the Cabinet the necessary changes we may need to adopt in respect to handling future polls,” he said

The options to conduct future elections include going digital by adopting e-voting or electronic voting system backed by necessary legislation to curb e-malpractices.

“At the moment even as the debate begins, we can only apply the law on the voting system as it is at the time,” Chebukati said.

He revealed that election protocols being developed by IEBC technocrats are in line with Ministry of Health guidelines on containment of Covid-19.

“The goal is to address the practical and legal questions around running elections while also decreasing the potential risk of spreading the virus,” Chebukati said.

This comes in the wake of the Building Bridges initiative (BBI) debate on the proposed electoral and law reforms that could see the country go to a referendum.

While a section of leaders want IEBC to consider introducing online voting in the looming referendum, others argue that e-voting is prone to manipulation.

A section of ODM officials argued that the Covid-19 containment measures pose a challenge to democracy as they could limit the key participatory aspects of elections.

ODM chairman John Mbadi told Sunday Standard that although online voting was good, hacking of the system could be its greatest undoing.

“To this extent we want IEBC officials to suggest legislation that would guarantee safe and credible online voting devoid of hacking and rigging,” said Mbadi, adding that “in absence of all these, hackers could ‘sneak into the system or some could also vote twice or interfere with the system’s software and bungle the polls online”.

Mbadi welcomed the IEBC election protocols and called for public debate in the wake the BBI Report, which has also suggested electoral reforms.

“Such IEBC proposals are still subject to robust and sober debate in public discourse in the wake of the BBI Report, which has also suggested electoral reforms among others by 2022,” he said.

But he was quick to add: “Our electoral integrity as a country is still wanting and given that many voters are not technology savvy, this could also make it hard to adopt e-voting system.”

Sources confided that IEBC was under pressure to determine how to manage the pandemic’s impact on the timing and sequencing of elections.

This is why for IEBC, devising timely, appropriate and sustainable solutions, drawn from own or others’ experience must now be gradually strengthened ahead of 2022.

Chebukati noted that elections are determined by the Constitution and Elections Laws.

“Election Laws are passed by Parliament, which means even if we make such a suggestion, Parliament will still have to ratify or reject it,” he said.

“A lot of people in the country will have to choose between their health or casting a ballot, however I don’t believe that is a good representation of democracy,” said Okello.

He said changing the voting system was a difficult decision to make in the wake of the Covid-19 outbreak, but admitted that distancing was key in the fight against the disease besides other health protocols.

“In the Kenyan case, elections can be more challenging following long queues that characterises our polls. This can be a death sentence to many,” he said.

The MP called for postponement of elections until such a time when it will be safe for voters to cast the ballot at polling stations.

“While drafting the laws on elections and the Constitution from article 81, no one envisaged such a catastrophic illness,” he added.

He explained that it is the mandate of Parliament to debate and vote for extension of election time.

The Nyando MP recalled that after enacting the new Constitution in 2010, the country postponed elections, which were to be conducted in August 2012, till March 2013.

“It has been done before, it can be done again. Life is too sacrosanct to be betrayed at the altar of a mere one day exercise called election,” said Okello.

ODM Secretary General Edwin Sifuna also weighed in on the matter, but said online voting should be a last resort.

“I have seen online voting system work on small scale during Law Society of Kenya polls, but I’m not sure how it can fare well with large scale heterogeneous population in Kenya,” said Sifuna.

Former ANC secretary general Barrack Muluka said technology was the way to go. “We shall wait and review IEBC protocols when out,” said Muluka.

“We are a country good in adopting anything technological, but also good in abusing such developments and blaming growth and development,” said Oduor.

I defended battery firm, but my family and I are now all ailing

Alfred Ogola was a village elder when demonstrations against a battery-recycling factory were gathering steam. But 13 years later, the effects of pois