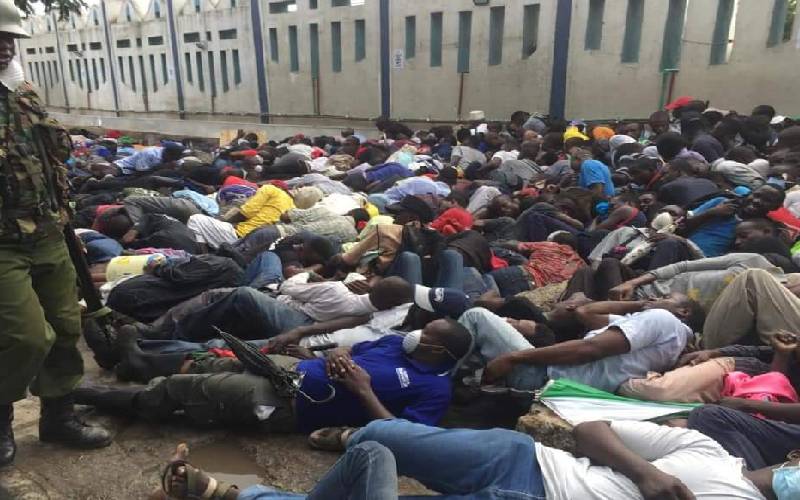 Leaders across the political divide have condemned the brutality meted out on Kenyans by police officers who were enforcing a government’s curfew to curb the spread of coronavirus.

Led by Senate Majority Leader Kipchumba Murkomen, the leaders said the action of the police as was witnessed on Friday evening defeated the very purpose of the curfew.

Police and commuters clashed at the Likoni ferry in Mombasa Friday afternoon, a scenario occasioned by overcrowding as residents rushed to beat the curfew deadline.

The situation was not different in Kisumu and Eldoret towns as police teargassed Kenyans for flouting the curfew rules.

Photos and clips of police beating up Kenyans who allegedly failed to adhere to the curfew emerged online with netizens condemning the police for using excessive force in handling Kenyans.

The Elegeyo Marakwet senator said the police action, endangered the lives of many Kenyans, saying lumping people together could have led to more infections if one of them had contracted coronavirus.

“Before we even discuss the violence, if any of them was positive, he or she must have infected so many. This is primitive,” he said, adding that if one or two of the Kenyans in this crowd were positive,  then the multiplying effect will be catastrophic.

He told Interior CS Fred Matiang’i to borrow a leaf from his Health counterpart Mutahi Kagwe by providing leadership and instilling order and discipline among the officers during the curfew.

“CS Kagwe has demonstrated great leadership during the coronavirus outbreak with timely updates to Kenyans, those in charge of our security must take the queue and enforce the curfew with a human face while respecting the rule of law."

Murkomen added that the action of the police as was witnessed in Likoni and other parts of the country is counterproductive.

He said the curfew was declared by President Uhuru Kenyatta to curb the spread of coronavirus, not to torture Kenyans.

Murkomen said officers must stop acting like they havea a grudge against Kenyans and the curfew has provided them with an opportunity for revenge.

Siaya Senator and Senate Minority Leader James Orengo told off the police for violating the rights of Kenyans in the name of enforcing a curfew..

“A state of emergency does not by itself ineluctably limit or suspend the Bill of Rights. There must be legislation. In any case, national security must be pursued in compliance with the rule of law and human rights. Police must not enforce the curfew with might but love and fight Covid-19,” Orengo tweeted

ANC leader Musalia Mudavadi told the police to spare Kenyans the beating, saying majority of citizens are already economically distressed and that any brutality will break their hearts.

Mudavadi said what Kenyans want in the wake of the coronavirus pandemic is love and civility and not the brutality witnessed on Friday.

"Enforcement of the curfew does not mean terror and brutality to the mwanainchi. Treat the citizenry with civility,” said Mudavadi

Nandi Governor Stephen Sang condemned the brutality and told the law enforcers not to confuse Kenyans with the coronavirus.

“Police brutality witnessed this evening across the country is unacceptable. Police must not appear to confuse wananchi for coronavirus. Even as we urge Kenyans to adhere to the directives and guidelines issued by the government, rule of law and common sense must prevail at all times,” said Governor Sang.

Cases of police brutality have been witnessed in certain parts of the country as the nationwide curfew took effect on Friday evening.

Police spokesman Charles Owino has however defended the officers, saying there was no brutality as being claimed.

Speaking on one of the TV stations on Friday night, Owino said the police are well trained and know when to use force and to what extent.

He cautioned Kenyans against ignoring the curfew, saying they will not hesitate to arrest anyone flouting the directives.

Why most first-class degree holders are under-achievers

For many, undergraduate life is a moment of experiment, savouring a newfound liberty, and a time to explore and nudge at the limits.

By Willis Oketch | 5 hours ago

By Nicholas Mburu | 22 hours ago

By Isiah Gwengi | 1 day ago