Gangsters on bikes who kill, maim at will 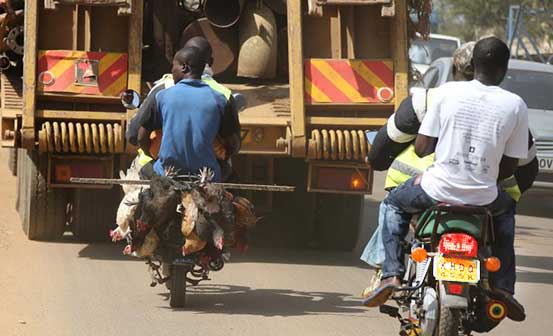 Cases of students and boda boda operators being attacked by criminals have raised concern in Kakamega town.

For five months now, the gang has left death and pain in its wake. Victims say the suspects, who at times don police uniforms, escape on motorcycles.

At least four students and four boda boda riders have died in the hands of the gang and motorcycles stolen. The survivors sustain life-threatening injuries.

Students living at Kefinco, Lurambi, Kakamega State lodge area, Murram, Maraba, Makaburini and Sichirai estates have fallen victim to the criminals who are in their early 20s.

The victims are found dead by the roadside with deep panga cuts while others in their rental houses.

Boda boda operators are now forced to go home by 9pm for fear of attacks. The have also resorted to vetting their customers as some have turned against them along the way.

The latest attack took place on November 20 near the highly guarded Kakamega State Lodge where two students, Olive Cheruto, a fourth year student and Rashid Otieno, a first year student were accosted by two people riding on a motorcycle armed with pangas at around 8pm.

Recently, Moffat Ambunda, a third year student, went missing for three days only for his body to be found at the Kakamega Teaching and Referral Hospital mortuary with deep cuts on the head and legs tied with a rope.

“Moffat went missing on November 1. We alerted his parents, as we launched a manhunt for him and three days later, we found his body in the mortuary,” said Japheth Anyingu, the deceased’s friend.

But police say he was killed by students after he was found stealing from a hostel at the university.

Nathan Makori, a third year student at the university, escaped death by a whisker after he was accosted by criminals at Maraba near the Kakamega Cereals Board AP Line at around 7.50pm.

Makori says he had just bought food and was walking home with his friends when two men on motorcycle attacked them with pangas and made away with their phones.

“They slapped us several times. One of them wanted to slash me on the head but I shielded myself with the hands. He slashed my legs but my colleague who was still wrestling with the other suspect raised the alarm and they sped off on the motorcycle,” he says.

Masinde Muliro University Chief Security Officer Julius Mabia told Saturday Standard that they reported the cases to the police. “We met with the security team and raised our concerns which are being addressed, including increased patrols,” he said.

But Kakamega Central Police Commander David Kabena dismissed claims that the estates are insecure and instead blamed students for the attacks.

“We have had people claiming that they were attacked at Kakamega State Lodge and that’s not true. Milimani estate is heavily guarded since government officers live there and claiming that people have been attacked there is outrageous. So far, no one has reported the matter to us,” said Mr Kabena.

On Moffat’s death, Kabena insisted he was killed by students after he broke into a hostel and the police removed his body to the mortuary. He promised to beef up security in the affected areas.

In books, Chepalungu Forest in Bomet County sits on 4,871 hectares. However, things are different on the ground.

By James Omoro | 20 minutes ago

By Benard Lusigi | 45 minutes ago

By Kevin Oguttu | 4 hours ago