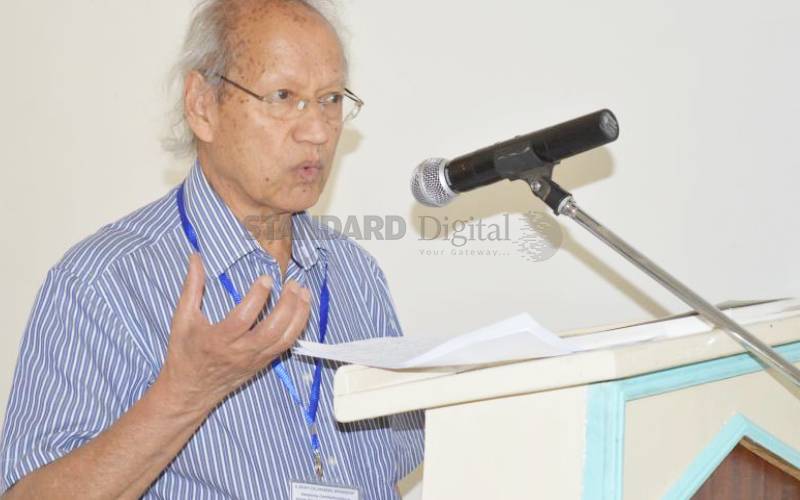 Key architects of the current Constitution have criticised the ongoing clamour to amend the document, saying it is being driven by cheap political expediency with the eyes glued on the 2022 General Election.

Former Constitution of Kenya Review Commission Chairman Yash Pal Ghai (pictured) and former chairman of the Parliamentary Select Committee on Constitutional Reforms Abdikadir Mohamed told a parliamentary committee that the current push to amend the supreme law was being championed by politicians with selfish interests.

The two constitutional lawyers said it was unfortunate that politicians are championing changes before the full implementation of the Constitution.

They argued that if the Constitution was fully implemented, some of the flaws that were being cited about the documents and necessitating calls for a referendum, would be addressed.

“Sadly, the main push for change is politically motivated, with the eyes on 2022. We should never play with a document as important as the Constitution just for short-term political gains. Let us only consider amending the law for posterity,” said Mr Abdikadir.

The former Mandera Central MP who chaired the Parliament’s Constitution review committee at the critical stage of its writing and its promulgation, said the spirit of Constitution-making was to first implement the document before considering amending it.

He particularly singled out those citing inclusivity as the reasons they are seeking to amend the law, saying their interests were only the political inclusivity because they are eyeing certain seats in the next General Election.

“The change they are pushing through is not in good faith, it is only for political expediency just because someone has an eye for 2022. We have a bigger issue of implementing the document first before we can talk about the changes,” he said.

Abdikadir said devolution was meant to cure complaints of exclusivity, adding that the wisdom of makers of the Constitution was to ensure that sufficient resources were allocated to all counties so that every part of the country felt it was in Government.

However, he said many forces were keen on strangling devolution, even as he accused the Executive of resisting changes in an attempt to maintain the status quo and the Legislature for failing to usurp their constitutional powers, especially on budget-making.

“The National Assembly has abdicated the responsibility of budget making. It is now only a rubber stamp of Treasury… We keep denying counties more resources because while the Auditor General has audited the accounts up to last year’s financial year, Parliament has only approved the accounts of up to 2014, yet that is the figure we are using to determine the money we are giving to counties,” he added.

Prof Ghai, who spoke at length about the aspiration of the Constitution said, he was reluctant to changes in the fundamental framework of the document to serve a select few, adding that any changes to the law should be in the interests of Kenyans.

Ghai, however, differed with Abdikadir on the preferred mode of governance, maintaining that he still supports the proposals of the initial Bomas draft that called for a Parliamentary system, with a powerful prime minister as the head of the Executive and a President with minimal executive powers.

“We should have a Prime Minister who will be the leader with the highest number in Parliament, but we have a President, not as a flower but with some powers,” said Ghai,” said Ghai.

Unruly kids: The chickens are coming home to roost

He described, in nauseating detail, what he was going to do to a schoolmate who had offended him.

By Fred Kagonye | 52 minutes ago