DPP’s plan to free prisons: Confess and we let you go 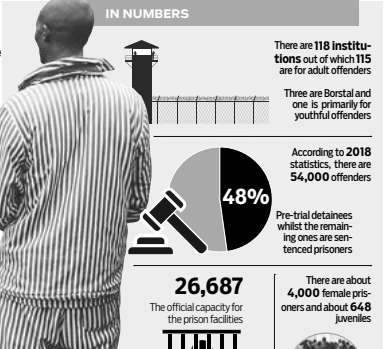 Hundreds of first-time offenders who readily confess could soon be spared tough jail terms if a proposal by the Director of Public Prosecution’s office passes the test.

As it is written that whoever confesses their sins and does not conceal their wrongdoings will be forgiven, the office of the DPP has taken cue through a draft ‘Diversion Policy’ aimed at decongesting prisons and giving criminal suspects a second chance at life.

The ambitious policy plan formulated by the Department of Offences Against the Person will also save underage sexual offenders and first-time graft lords who are willing to return their looted cash to public coffers.

“Diversion is an initiative which caters for a second chance for those who are young, those who haven’t transgressed before, those who live within the scope of the law and those who in the interests of justice, should not be condemned for a single mistake,” says the policy.

It will, however, not come easy for the offenders as many factors will be considered, including offering an appropriate and agreeable compensation to the victim.

After admitting the offence, the suspect must make a written apology to the victim, offer compensation for any expenses incurred, agree to undertake a community service and make a pledge not to commit another crime.

DPP Noordin Haji will also retain the power to allow the request for diversion after considering the seriousness of the offence, whether the offender was in a position of power, offence was premeditated or if it was carried out by a group.

“It aims to rehabilitate and redeem the offender rather than punish the crime. It is to heal rather than to hurt by rehabilitating the transgressor through positive steps of making amends, attending constructive courses and serving the community rather than being ostracised from it,” says the policy.

With a holding capacity of only 27,000 prisoners, the 118 prisons facilities in the country are overflowing with more than 56,000 inmates -- two times above the limit.

Majority of the inmates are petty offenders who would readily benefit from the diversion policy once adopted.

The prisons department, the Judiciary and other players in the justice sector have been grappling with various ways to decongest the prisons, with many recommendations of plea bargaining and alternative dispute resolutions, some of which have not borne much fruit.

Under the proposed policy, a suspect’s eligibility for diversion will be considered once it is determined that the evidentiary test is met, the suspect admits the offence, and diversion is an appropriate disposal of the outcome.

“When deciding whether to prosecute or divert, the key question should always be whether the conduct really warrants the intervention of the criminal process or diversion can be sufficient,” says the draft.

Once a file is forwarded to the DPP after investigations, an initial review will be made to make a decision whether to charge. If the case is eligible for diversion, the suspect will be notified and offered the chance to confess his sins and make amends.

In the event that the matter has ended in court, either the prosecutor or the accused person can request the magistrate to adjourn the case to allow parties consider diversion options.

Although the policy will apply to any Kenyan of any age, vulnerable persons like children, people living with disability, mental persons, the elderly, juvenile consensual sex offenders and those without any previous criminal record will be given priority.

“In cases involving a child suspect or a person with mental illness, the parent, guardian or legal representative shall be involved in the diversion process,” says the proposal.

No one will be considered for diversion policy if the conviction is likely to result in a significant penalty, if the offender abused his position, if offender is a ring leader of a gang, if offence is carried by a group or if the offence is of corruption and economic crimes.

It will also not apply if the offender threatens the family of the victim, if the crime is committed against vulnerable persons and if the suspect has a previous crime record.

The victim’s views will be a key consideration before any suspect is admitted to diversion policy although it is the prosecutor who will have the final say of whether to prosecute or not.

“The prosecutor will determine whether a restorative justice is a suitable way to balance the needs of the victim. He will find out if the victim is willing to meet the suspect to enable the victim explain the impact of the offense on them,” says the draft.

Debate on high number of juvenile sexual offenders has been rife, with judges, lawyers and human rights activists calling for a review of the Sexual Offences Act to save hundreds of young boys from jail.

On Friday last week, the Court of Appeal proposed that the consent age be lowered to 16 in consideration of young men who suffer lengthy jail terms as a result of the Sexual Offences Act.

Appellate judges Roselyn Nambuye, Daniel Musinga and Patrick Kiage said the time is ripe for the country to discuss challenges of maturing children, morality and proportionality in punishing sex offenders.

The ‘Diversion Policy’ offers an escape route for the young offenders who have consensual sex.

“The purpose of diversion is based on principles of restorative justice rather than that of retribution, with its aim to shield contrite offenders, who freely admit guilt, from the rigors of being subjected to the criminal justice system,” says the policy.

It will be an intertwined process where the Judiciary will give directions, the investigating agencies carry out comprehensive investigations, the probation office supervise the programme while the prisons will identify suitable cases for diversion.

Ronaldo gets police caution for incident at Everton match
Football
By Associated Press
5 mins ago
WHO chief: Lack of help for Tigray crisis due to skin color
Africa
By Associated Press
18 mins ago
Hunger and high wage bill await Mutula Kilonzo
Eastern
By Stephen Nzioka
25 mins ago
Premium Jaramogi told me to guide Raila: Says Phoebe Asiyo
Politics
By The Nairobian Reporter
45 mins ago
.

By Erastus Mulwa 12 hrs ago
Healthcare is our top-priority, deputy governor-elect says