Kenya Pipeline Company MD Joe Sang and four co-accused have been released on a Sh2 million cash bail each.

They all denied graft and abuse of office charges in the Sh1.8 billion Kisumu oil jetty contract scandal.

They were arraigned at the anti-corruption court on Monday 10th December and charged with abuse of office, failure to comply with applicable procedures and law and engaging in a project without prior planning.

Chief Magistrate Douglas Ogoti also ordered them to deposit their passports in court.

Mr sang has already informed KPC board in writing that come April 2019 and he will not be seeking to have his term renewed so that he can pursue other interests.

The five are among 21 other officials from KPC and NHIF who were arrested on Friday on suspected on suspected corruption.

The arrested officials spent the weekend in police custody where they y received a number of visitors including high-profile personalities in the country.

KPC has been making headlines in the past few weeks after it emerged that some officials might sold oil products and claimed they were lost in spillages that have been hotly contested by oil marketers.

The marketers have refused to have the cost of the losses passed onto consumers and demanded an independent audit that the oil-pumping company has agreed to.

The marketers, however, say the time-frame for the audit is too short. 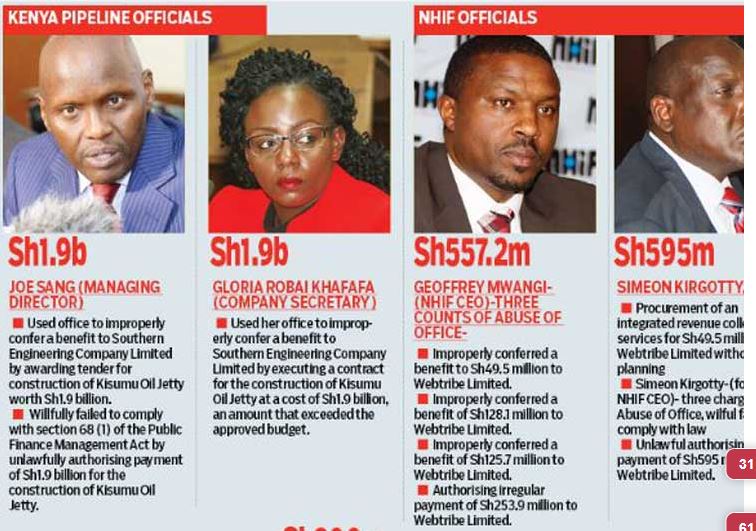 The cheap and simple test uses a color-changing fluid to reveal the presence of malignant cells anywhere in the body.

By Eric Abuga | 5 hours ago