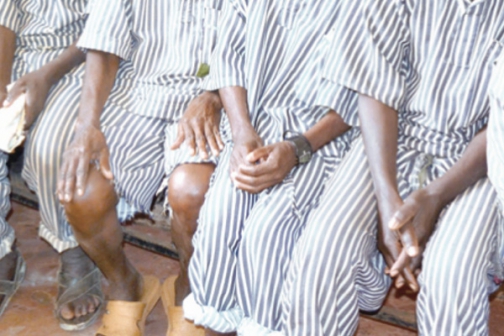 Mr Ouma (not his real name) can take an offer from Al Shabaab for bail and leave prison as the newest recruit of the militant group or turn it down and continue languishing in the dark, filthy and lice-infested cells of Industrial Area Remand Prison, with the chilling possibility of having a date with the hangman.

The suspect is the next on the hit-list of the Al Shabaab terror gang that has turned to Kenyan jails to recruit dangerous and hard-core criminals to support its terrorist activities in the region.

Investigations by The Standard show that some terror suspects have transformed themselves into agents for the terror gang to continue with their activities even behind bars.

The agents target vulnerable inmates, especially those facing serious crimes that could get them capital punishment and have nothing to lose.

Also on their hit list are suspects who are too poor to afford a decent lawyer or raise hefty cash bails.

Ouma was arrested for robbery with violence in January. If found guilty, he could face the death penalty.

After he was charged, he was taken to Industrial Area Prison, where he came face to face with an Al Shabaab agent he identifies as Moha.

“Once someone is converted to Islam, they can take a Muslim name. The agent is known as Moha around here,” Ouma says.

Having been slapped with a cash bail of Sh500,000 by the court, Ouma says he was extremely tempted to take the offer given that his family was too poor to raise the amount.

“They take time to study you. If they notice that no one has visited you for a month or so, they offer friendship. At this time you are very vulnerable. At first they give you toilet paper or offer you a better meal (than regular prison food),” Ouma says.

A plate of beef costs Sh1,000 behind bars. So it is rare for a total stranger to slide a plateful of the delicacy inside your cube, especially in remand where everyone is struggling to survive.

But first, Ouma says, one must agree to convert to Islam before any deal can be tabled.

“I was offered a deal that was too good to resist given my circumstances. They offered to pay my bail if I changed my religion to Islam. They would then ensure they took care of everything from there. Mine was just to say yes, do what they want,” he says.

Ouma is not alone. The Standard team met three other former inmates who had a run in with the recruitment ring last year.

The Government has been aware of this radicalisation from within for over a year now. Last year, President Uhuru Kenyatta said the Government would set up a special new prison for violent extremist offenders.

Some of the men running the recruitment ring are facing charges of funding terrorist activities.

“Moha was not allowed bond or cash bail. He has a brother in Somalia who is at the heart of the recruitment business. He is the one that sends money to the ones in need,” Ouma adds.

He speaks from the confines of prison, in handcuffs, behind a wall, through small window openings for visitors.

A Government report said Al Shabaab operatives and the Amniyat – the intelligence wing of Al Shabaab - are looking for fertile grounds to recruit, radicalise and possibly attack targets in the country.

A prison warder at Kamiti Maximum Prison said one of their toughest jobs was dealing with the Al Shabaab suspects in custody.

“We started hearing the stories of recruitment as far back as when Aboud Rogo was here. But it is not easy to crack the cells. They are too secretive and if it is still going on, then several men have fallen victim,” the warder said.

Rogo was at Kamiti for two years before he was released and later killed. The Government was very uncomfortable with his radical teachings and his stance on the Al Shabaab war.

The prison warder however maintained Al Shabaab suspects are held in isolation and have little interaction with other inmates.

Today’s Budget reading by Treasury Cabinet Secretary Henry Rotich will mark that time of the year most traders dread most.