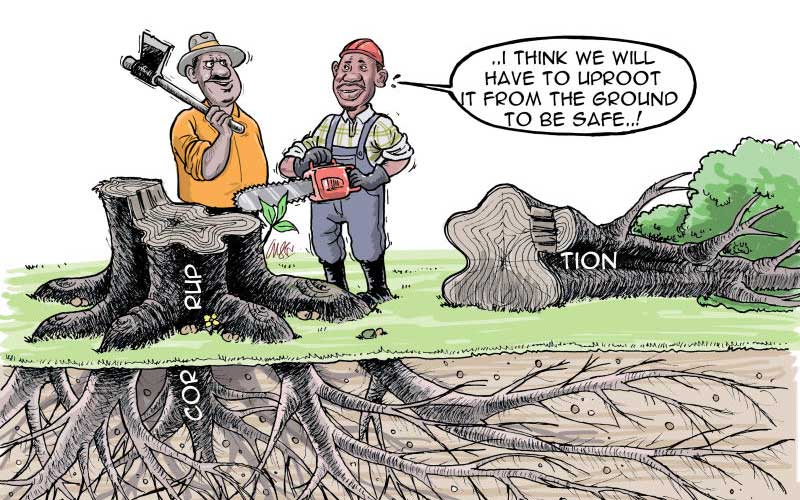 As the process of collecting signatures for the ratification of the Building Bridges to a United Kenya Taskforce Report readies to start, the anticipation and hope for the majority of Kenyans is palpable.

Many are celebrating the fact that the dawn to freedom is here at last. But it is only the majority. A sizeable minority of the population is not as enthusiastic.

A fine order, legal and moral and right way of doing things is always desirable to many. But not to all. Just like we hear of people who took, and are taking, an advantage of the ravaging Covid-19 pandemic to defraud compatriots of billions of shillings, there is always a cabal of people who relish a chaotic environment to thrive.

The corrupt are one of the people who would anything to maintain the current constitutional status quo.

You see, of the nine major issues highlighted by the BBI, perhaps the most angering for many of us is corruption. It often feels like something beyond our control. For many Kenyans, we feel as though we have no option but to raise our hands and surrender to this unfortunate reality. And the corrupt will be happy if we surrender.

But we, the majority can’t and won’t give up.

On the former, it is a question of morals. On the latter though, it is the law of the land. The BBI report, however, is addressing both.

The report recognises that leadership should come from skills and experience, from working to serve the people - not make money off of them. It requires that leaders work for the people who elected them, and not the other way around. The collection of signatures is, therefore, the clearest message that the era of impunity is behind us.

In terms of individual responsibility, let us keep in mind that corruption occurs also at very small levels. The common practice of petty bribery is a cultural problem that destroys our lives and our future. In the words of the BBI report, “it is undermining our public and private institutions, and will destroy them and our aspirations as a nation.”

No more bribing the police to get out of a tough situation. No more giving cash donations or bribery to school officials to make sure that your kids pass their exams. And business leaders can no longer pay to get contracts of lucrative tenders.

The report recommends acknowledging whistle-blowers with monetary awards. If money is what motivates us, then so be it. President Uhuru Kenyatta and former Prime Minister Raila Odinga, whose famous handshake birthed the BBI report, committed to cracking down on using connections and networks to get out of trouble, because everyone here must be equal under the law.

The corruption problem is deeply connected to another major challenge we face - the lack of a national ethos. To the outside world, Kenya is all too often known for its tribalism and lack of national cohesion.

We too frequently define ourselves solely based on our tribe and forget the importance of our national identity. Tribalism has evolved into too many self-serving interests and lack of commonality. We share much more than being residents of the same country.

But this is about to change with the anticipated referendum and eventual new law.

As Kenyans, we need to work towards developing a national ethos, which means defining our Kenyan identity and values together. Our common aspirations should include first and foremost no longer tolerating corruption.

The first step is the acknowledgement of the problem, the second is coming up with a solution, the third is implementation.

The appending of signatures and eventual passage of the BBI report in a referendum will mark the third phase - we have known for a long time that corruption is rife. In the past, we whispered it in private, but now it is a highly public issue.

Once we are through with the enactment of the “BBI” Constitution, the corrupt will have nowhere to hide. No wonder they are fighting to derail this “monster” that intends to eat them off the face of Kenya.