Ravages of terrorism in northern Kenya is profound 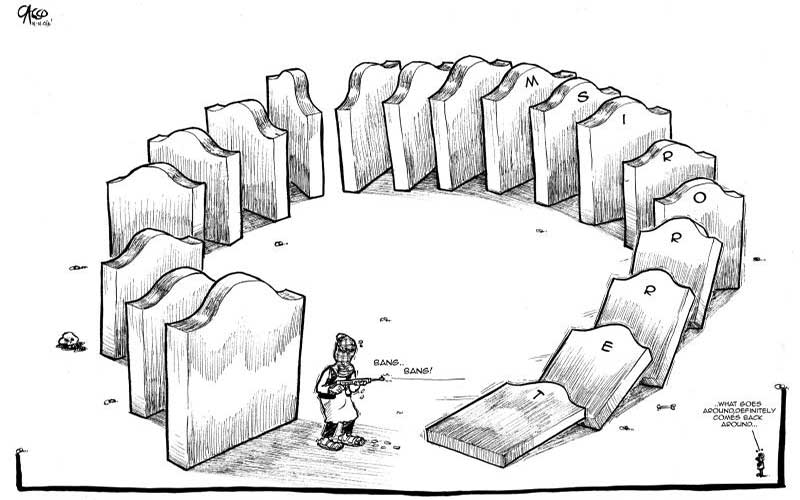 In the face of chronic terrorism, the psychological, economical, sociological, and political impacts affect the community and ravages the lives of those involved.

Extremists like the Al Shabaab will not tell you that their radical ideologies are destroying the future of the families in the North Eastern Region.

Activities of the terror group has slammed and affected almost every sphere of human life in the region. In case of an attack, the terrorists’ fanaticism adds a dimension of horror. This shows how disturbing the idea of an “enemy within” is as they are focused in frustrating the efforts of a better life in northern Kenya.

The group often demand from the locals that children are surrendered to them as fighters, as the commanders within the Al Shabaab have their children studying in good schools with a promise of securing a brighter future.

The terrorists’ activities have caused thousands of students in the NER to go without a proper education thus depriving them of the skills and opportunities that schooling can bring and risks further stunting the region’s development.

While the human cost of terrorism is devastating, the economic impact in the region is larger than most realise. Terrorism imposes significant economic costs on farmers, herders, taxi drivers and traders leading not only to direct material damage, but also to long term effects on the local economy. Though they might be the primary targets of attacks, the Al Shabaab has purposed to make the lives of these hard-working Kenyans difficult by disrupting the economic entities within the region.

Terrorists destroy existing plants, machines, transportation systems, workers and other economic resources and senselessly kill thousands of productive workers. Productive resources that might have generated valuable goods and services that could have alleviated the sorrow and pains of the locals are destroyed.

The region is likely to face a brain drain, as talented individuals seek residence and work in more secure, safer locations because of the continued threats and presences of this heartless group. The economic cost of this is considerable and usurps the efforts of opening up the region.

Terrorism has far reaching impact on the psychosocial well-being of the communities with the children bearing the brunt of the group’s activities like attacks and dissemination of terrorist ideologies.

Everyday life is coloured by the uncertainty that comes with not being able to know if you are safe. Children are especially vulnerable to the negative psychological effects of living under threat of a terrorist attack. These children are likely to suffer from PTSD, anxiety or depression.

The effects are not limited to the enjoyment of social cultural activities, whose objective is to guarantee that people, communities, clans and families have an opportunity to participate in their culture. Extremism and some fanatic ideologies bearers, prevents cultural expressions thus robbing the locals their dignity and thus promoting discrimination. This restriction with respect to socialising freely lowers the quality of life as it prevents people from truly enjoying their life and limits where they can visit, at what time and so on.

Additionally, construction, transportation and communications sectors have been severely hurt by Al-Shabaab activity. As such, engineers have abandoned construction sites in areas like Mandera, Wajir and Garissa. Even feasibility studies for new roads in the region have stalled, especially in the troubled hotspots.

Al-Shabaab’s constant destruction of communication masts in the region has forced residents to travel long distances to make telephone calls. These attacks have also locked many locals out of the vibrant mobile phone money transfer system that has become a vital avenue of commercial activity in Kenya.

A series of Al-Shabaab assaults targeting these professionals, who constitute a significant proportion of the workforce, has driven hundreds of teachers, nurses, public administrators and construction workers to flee the region. The departure of so many trained professionals from an impoverished part of Kenya has deepened its socio-economic woes, reversing gains of the last two decades.

Kenya has made some progress in rolling back Al-Shabaab’s infiltration from Somalia, primarily through greater community engagement to eliminate the “enemy within” whose aim is to create an atmosphere of anxiety, worry and fear for personal safety and disrupting daily life. It is an opportune time for you to rise against the terrorist and participate in the efforts to build the region and safeguard your future and that of your children and grandchildren.

The weighty burden on Kenya’s shoulders