Politicising miraa is gambling with lives 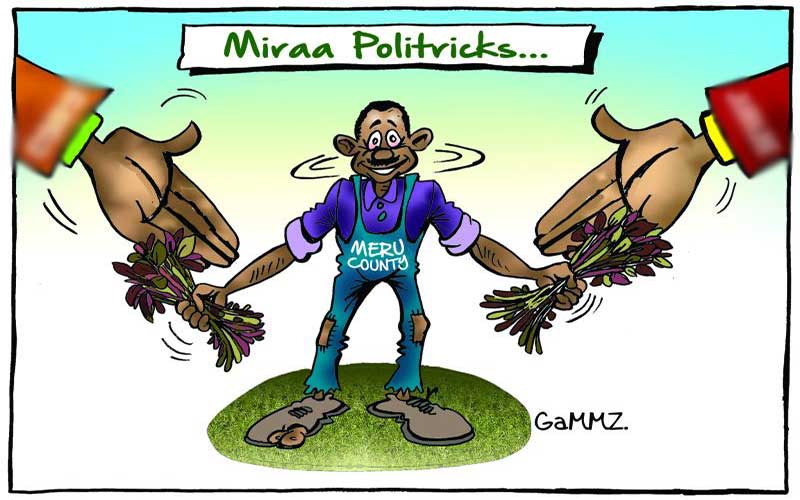 During a recent parliamentary session, former Majority Leader Aden Duale alleged that miraa is a drug and that passing of the amendment to make it a cash crop and the subsequent appropriation of money for its marketing, was ill informed. He further alleged the gazetting of the crop was a political move aimed at penetrating the Meru region by ‘dangling the miraa carrot’.

These sentiments are saddening for two reasons. First, they reiterate the unfortunate, egocentric and selfish intentions of the political class in Kenya. They are the regrettable evidence that Kenyan politicians do not have the poor communities’ needs at heart, but rather, only ‘dangle carrots’ during elections in order to ‘penetrate’ regions they deem otherwise impenetrable. For the Meru community and especially the miraa-growing region of Nyambene, the carrot was to make miraa a cash crop. This is a sad reality that the electorate has had to live with – our needs count only if they can be used as a means to an end for the political elites.

Secondly, miraa represents the hope for a livelihood for not only its farmers, but also the thousands of its traders. It represents the hope for a chance at an education for many children whose parents grow and trade in miraa. Miraa is to the Nyambene region is what coffee or tea is to the regions that grow the crops. Demonising the crop is equal to condemning the farmers to eternal poverty and their children to perpetual illiteracy. Once miraa traders are rendered jobless, the police will have increased crime rates to contend with. Granted, there is need to have proper conversations about possibility of value-addition to make the crop a more marketable, more worthwhile agricultural investment. Recently, a chewing gum made from miraa hit the market, although the Kenya Bureau of Standards Head of Quality Assurance and Inspection said it had not received a standardisation mark from his department. Nevertheless, this is a welcome attempt at making sure the crop, which is a recognised cash crop by law, is packaged better making its consumption more hygienic and appealing.

The Nyambene region has grown miraa for decades, and for many children born and bred in the region, the crop presented their only lifeline. Many professionals from the region will attest to the fact that they would be nowhere near their current professions and achievements were it not for the production and sale of miraa. Apart from being a source of economic livelihoods, the crop has a major cultural significance for the people of the larger Igembe region – it is part of dowry payments.

Despite contributing greatly to the economic well-being of the Meru region and the country in general, miraa farmers had been marginalised from the agricultural sector for years, until 2016 when the president signed into law a bill classifying it as a cash crop and subsequently announced allocation of Sh1 billion for miraa  farming, a long overdue move. He then appointed a task force to consult ‘farmers, traders and relevant stakeholders’ and ‘recommend strategies and interventions’ that would ‘support the development of the miraa industry’. It is unfortunate, therefore, that some politicians continue to term the crop a drug. The question that begs is, did the president allocate money for the growth and marketing of an illegal drug?

Attempts to illegalise miraa by some politicians without any regard for the people of Meru are regrettable. The farmers have already lost key markets and Covid-19 has only made their woes worse. Any further criminalisation of the crop will not only hurt the economy of the region, but also render many people jobless. Already, some traders have begun concealing the produce, disguising it as more legal consignments, in what appears to be a desperate attempt at earning a living. While these attempts amount to breaking the law, they are also an indication of how the loss of miraa markets can turn hitherto genuine traders into criminals.

Miraa production and sale is going to be with us for as long as its farmers in Meru continue to rely on it as a source of livelihood. It is a legally recognised cash crop in Kenya, a process that involved the very politicians who now shout their voices hoarse about its illegality. Rather than engage in political blame games, it is time that Meru leaders intensified the activities and strategies aimed at adding as much value to the crop as possible, to make it more marketable. Thankfully, the Kenya Agricultural and Livestock Research Organisation is set to establish a miraa research institute in Igembe North.

-Dr Kalangi is a communications lecturer and trainer at Kenyatta University

The power of social media to misinform