By Eliud Mwara | 2yrs ago 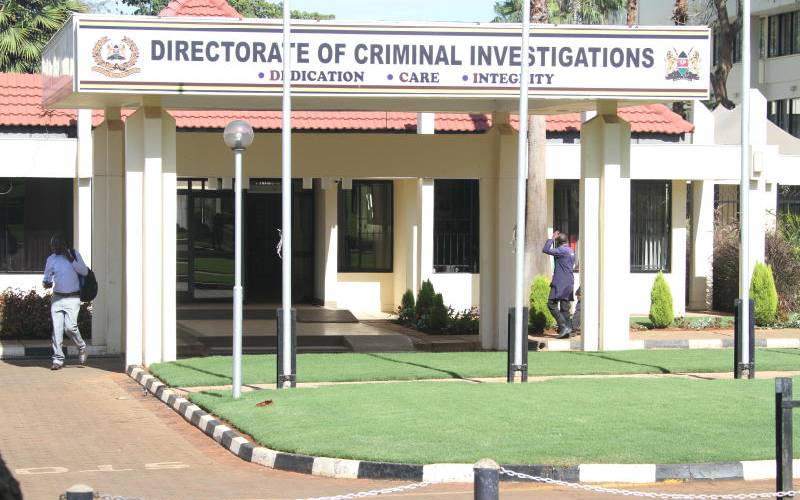 For the war against corruption in the country to succeed, there must be synergy in all players involved in the Criminal Justice System.

Little or nothing at all will be achieved if these players pull in opposite directions or get involved in unnecessary wars because this only serves to jeorpardise and frustrate President Uhuru Kenyatta’s resolve to fight corruption.

And for this war to succeed, the offices of the National Police Service/Director of Criminal Investigations, Director Public Prosecutions, the Attorney General’s office and the Judiciary must work to compliment each other’s mandate.

Each must keep their lane for the war against corruption to succeed.

These offices are all independent but inter-dependent for purposes of delivering justice, and are regulated by the law under CAP 75.

For the past two years, these offices have worked so well together with visible results that left corruption cartels trembling as the DCI unraveled case after the other hauling suspects in court where they faced multiple charges for mega corruption.

No one was spared from the chicken thief to those who conspire to steal billions from public coffers.

With this synergy, we saw big names, who ordinarily were thought to be untouchables, paraded in court with cases involving billions.

As one of President Kenyatta’s legacy project, Kenyans cheered on knowing that the government was serious, or so appeared to be in fighting the deeply entrenched vice that has devastating effects on the country’s economy.

But lately, this synergy is no longer seen to work as the DCI George Kinoti and DPP Noordin Haji appear to be reading from different scripts.

Trouble appears to emanate from the interpretation of the mandate of each of them and their offices.

While the DCI is clear that his office can, in law, initiate an investigation and forward the file directly in court for prosecution in criminal cases, the DPP disagrees and insists all files must pass through his office for approval.

Could it be a misinterpretation of the law for either of them?

How many cases are prosecuted on a daily basis in law courts across the country and are they all approved by the DPP or his office?

Observing the recent development, I decided to delve into the law to establish the procedure.

Section 89 (4) states that only a police officer, after investigations may arrest, draw a charge sheet, sign a charge sheet and present a suspect in a court of law.

Any amendment of a charge sheet by any other person or body other than the investigative agency can therefore, easily lead to a mistrial because once a charge sheet is amended, the accused person must be called to respond to it.

In delving into this subject, I noted that any other person other that the DPP may institute prosecutions in court otherwise known as private prosecution.

This debate must be allowed to prosper to enlighten Kenyans as to who is mandated by law to carry out which mandate and to what extent.

For the war against corruption to succeed, all the offices under the Criminal Justice System must work together, independently.

Just last week, a High Court ruling by Justice George Odunga sitting in Machakos stated that police, in reference to the DCI who undertakes investigative functions, has no powers to whatsoever, charge suspects in court without the consent of the DPP.

The ruling was made following a case filed by Geoffrey Sang, the former MD of the National Water Harvesting Authority who protested that he had been charged without the approval of the DPP.

This ruling has far-reaching implications, with the potential of touching off suits from other accused persons investigated, arrested and subsequently charged without the consent of the prosecution and whose cases are either active or concluded.

Speaking to police officers and prosecutors, they all agree that there are several cases filed in various courts across the country without the consent of the DPP, and which his office prosecutes once they are in court.

Does it mean these cases are filed illegally? That is the question in the minds of legal scholars, with some arguing that it is lawful.

Those who agree with that, say the DPP’s work is to prosecute cases, including those already filed in court.

Since the law is clear on the mandate of each of the office holder, it is time all the key players in the Criminal Justice System worked independently to compliment each other for the benefit of the success of the war against corruption.

Corruption cartels in the country must be partying knowing that the DPP’s office is at loggerheads with that of the DCI.

And the loser is the public who expect results from the two independent offices.

We must all be worried when we see two public institutions wrangling over their mandate.

No wonder we nolonger see suspects of corruption being hauled to court on Monday’s after the famous Kamata Kamata Friday as was the case when there were no wrangles in the DCI and DPP’s office.

By Rose Mukonyo 5 hrs ago
I like attention to detail, the pursuit of perfection