Until we clean out IEBC nothing BBI advocates will mean much 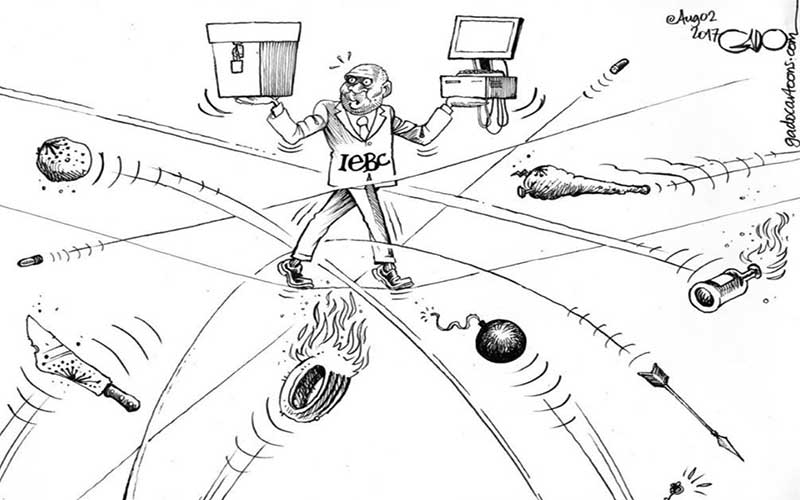 Until we fix the way we do elections, so that it is voters rather than counters, spooks or computers that determine our leaders, not even 100 BBIs can fix our problems, and take us away from the brink of disaster. Nothing will change if those in power know that they are the product of theft and do not owe us—voters -- any allegiance.

The rampant looting of the country by this Kenyatta regime is fundamentally tied to the fact that impunity was allowed to thrive by the courts in weakening Chapter 6 of the Constitution, and by the Supreme Court’s pathetic elections judgment in 2013. The message sent out then was clear and loud: grab, kill, loot and you will get away with it. The transformation of what was a much more reasonable loan proposal to the Chinese for a railway rehabilitation from Mombasa to Malaba into the white elephant that is SGR was also a loud signal that the floodgates of looting were open to those in or close to power.

The one time Kenya came close to turning a new chapter was in 2003 after the only fair, transparent, credible, accountable, efficient and accurate elections since independence. There is a connection between progressive change and hope on the one hand, and credible, fair and accountable elections on the other.

The confidence wrought by those elections was a key reason that the same Kenyans who had cowered before the police and the state, were now the ones arresting police and officials in our determination to get to a new Kenya. We believed that we would finally start the long process of nation-building where our diversity would be a strength. We were determined to ensure that finally even the most remote and marginalised areas of Kenya would get attention, development and hope. And we were dared hope that the land-grabbing, torture, killings and autocracy of the past were behind us for good.

But, sadly, our sense of being “unbowgable” faded when the Kibaki government (mostly the politicians and civil servants who had served under Moi quite happily and only shifted when it was clear that the Moi project Uhuru had failed) decided that what it was enough simply to replace faces but continue with business as usual. To be sure, the casual way that those at the top of the Kibaki government cast away our hopes and aspirations for a better Kenya is a significant factor in keeping Kenya poor, divided, tense, and a paradise for looters, incompetents and killers.

It went from bad to worse after this, with the then Election Commission of Kenya  presiding over elections in 2007 that were so grossly stolen that Kenya almost went into full-scale civil war. Even the timid Krieglar Commission could not affirm the winner of the presidential election, opting to not investigate the mess at the tallying centre at KICC, perhaps afraid that that could further delegitimise the Kibaki regime.

The 2010 Constitution was supposed to right these wrongs. But sadly, the Independent Elections and Boundaries Commission (IEBC) then took us to the brink in 2013 by selecting our leaders for us. Again, it was an example of might over right, voiding the reforms of 2010. The lack of transparency was clear with the IEBC sharing a server with Uhuru Kenyatta’s party TNA, and election results being transmitted in ways that were not fathomable.

So biased was the IEBC that the then Chairperson, Ahmed Isaack Hassan, was not even reticent in pronouncing--in writing too--his bias in his closing submissions at the Supreme Court during the petitions, lambasting one of the candidates in language that should—had any upright judge bothered to read—led to an immediate cancellation of the elections and the arrest of the Commissioners and staff of the IEBC.

But so lacking in credibility was this IEBC and so volatile was the country that it was necessary to move the Commissioners on, even though they put up a spirited fight. They received their golden handshakes to move on, but the staff—the crucial and indispensable part of any elections--were mostly retained.

The year 2017 was a similar story, but this time a more engaged Supreme Court decided not to follow the well-worn script of might over right and annulled the results. And the courts have paid the price for this rare integrity, being targeted with abuse, threats, intimidation and arrest, clearly to send a message that Kenya has its owners and there is a price to pay for doing the right thing.

Amid all this recent history, and even though the current IEBC is unconstitutionally constituted, the IEBC Chairman has stated that he is there to stay come. Whether this is the first salvo in the bargain for a diamond handshake, or whether he simply does not care for Kenya over himself remains to be seen.

But we do know that until we clean out the IEBC—from top to bottom—nothing that the BBI recommends will mean much. And it surely did not need all that time and resources to come to the same conclusion as any reasonable Kenyan on restructuring and reforming the IEBC.

Let review of ICC performance strive to restore its legitimacy

By Mukurima Muriuki | 17 days ago