Good laws not enough for the Kenya we want 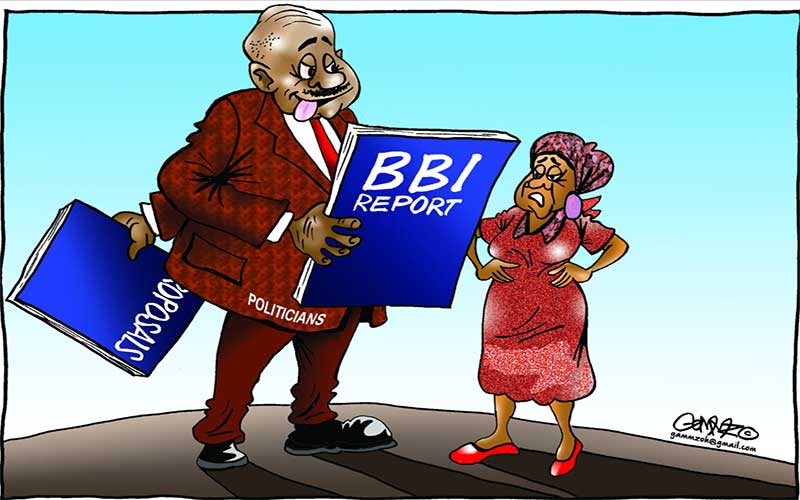 “When we put the cart before the horse,” say Harvard professors Clay Christensen, Efosa Ojomo and Karen Dillon “neither the cart nor the horse will move.”

They were answering the question whether good laws are enough to propel societies. Their conclusion, contained in the book; ‘The Prosperity Paradox: How Innovation Can Lift Nations out of Poverty’ was that on their own, good laws are not panacea for the problems societies face but nonetheless, remain a critical ingredient.

The good professors aver that good laws are a means to an end and not an end in itself. Keenly looked at, the BBI has gone back to the Agenda 2 and 4 of the 2008 National Accord. The Accord posited that national healing and reconciliation, and addressing the underlying causes of the 2007/08 post-election violence would minimise future bloody political contests.

The 2010 Constitution was one of the means of addressing these issues. A new constitution, said the political class then, would cure corruption by promoting accountability, establishing and strengthening critical institutions, including the Judiciary and Legislature that underpin democracy. Besides, a robust Bill of Rights would promote public spiritedness; while media would operate unhindered and the civil society would agitate without state encumbrance.

Yet 10 years later, it seems as if things have remained the same. Kenyans asked for a counterbalance to the all-powerful president (Executive, if you like); they were given. Parliament and Judiciary enjoy the doctrine of separation of powers. They wanted the brutal provincial administration network dismantled while reinforcing a culture of accountability and service delivery in public service.

To a small extent, this happened. Yet truth be told; we haven’t seen nor witnessed an ideological shift in our politics. The overriding theme every electoral cycle is that it is our turn to eat. So those with power fight hard to keep it while those who lack it, fight tooth and nail to take it.

The bitter contests that characterised the 2013 and 2017 elections offered a sober reminder that the new constitution has not muted the ruinous political competition experienced every electoral cycle; that actually it has not drained away the hatred, the chronic partisanship, the cronyism, the anger and the deep-seated tribalism that defines our politics.

Put it another way; a new Constitution has not diminished the stakes in political contests. Will the recommendations of the BBI task force yield a different outcome? The storm in the political arena ought to be a warning to Kenyans that we are headed the same (wrong) way. Doing things the same way and expecting different results is utter madness.

On the whole, the journey Kenya has taken looks similar to that of Malawi. The new dawn has not given way to the much-sought-after new beginning. Instead, it has been a litany of dashed hopes and hang-ups. The story of the lost decade is how hopes rose, fell and then crashed, painfully.

The politicians have rallied the people around abstract ideals that are not tangible or realistic or attainable; unity and peace. In Africa- particularly in Kenya- politicians make a case for unity, but you could ask; unity for what? Peace, we were taught in history lessons is not just the absence of war. The truth is the people have been hoodwinked to believe that the tribal mobilisation is there to defeat a common, unseen enemy.

And so though elections have been held regularly, they have not been sufficient to cause the desired change; which really boils down to our culture. What is lacking is public spiritedness and hence the bad choices we get to make. Christensen et al point out that culture plays a great role in social transformation. Culture eats strategy for lunch is a common phrase in corporate literature. That is equally true for countries.

A culture that promotes subservience by extolling the tribal chief is a drag on progress. Though the people are right to feel that a corrupt and insensitive incumbency is being rewarded over and over yet the glass remains half empty, it is true that Kenyans have been inured to accept ‘good enough’ as okay. Kenyans install bad leadership expecting a miracle through good laws. That won’t happen.

The institution of leadership is a reflection of what the people value. And so, would changing the constitution (again) address the challenges of the country? Quite frankly, no. It would take more than new laws to disrupt the hateful and highly divisive politics. A change in culture, perhaps.

Mr Kipkemboi is The Standard’s Associate Editor for Partnerships and Projects. [email protected]