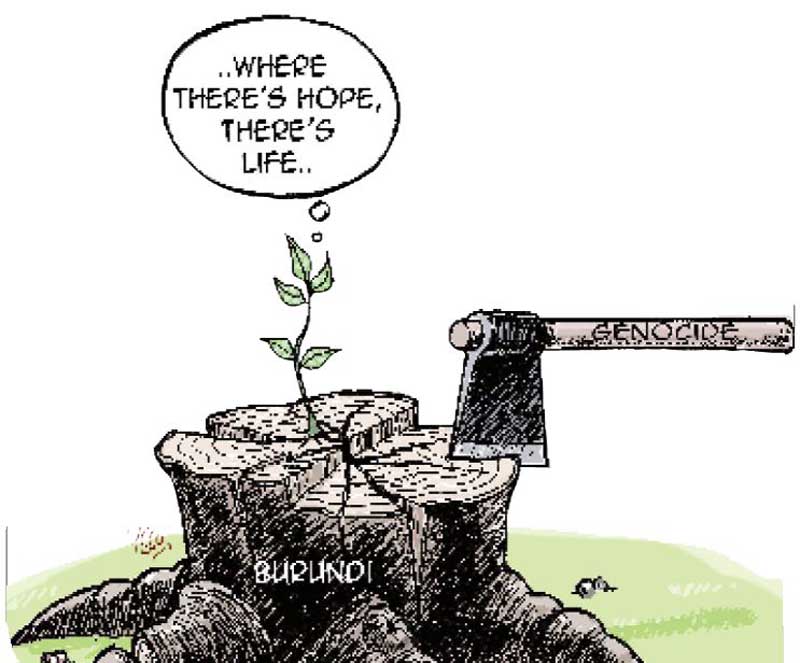 In the darkest moments in the history of an independent Urundi, now Burundi, few could foresee that a glimmer of hope would rise ever again. Yet, like the proverbial African sun, hope rises for the people of Burundi after the scourge of genocidal killings.

The carnage and stench from the pogrom of 1993 to 2006 left families embittered and displaced from the social order and decency that was once greeted with unfeigned familiarity.

Freddy Kaniki, the young son of a Congolese preacher witnessed the butchery and the gore perpetrated against his father and three brothers because of who they were and nothing else. Yet, Kaniki believed in hope. He held onto hope because the sun must rise again and good always supersedes evil, although the pain and horror were indescribable.

The unforgettable truth was the loss of human lives estimated at 300,000. It was the fallout of Burundi’s 12-year-old war. An additional 500,000 persons suffered internal displacement and many observers considered their circumstances pessimistic. Burundi’s brutal conflict weakened its infant infrastructures, depleted its social welfare and fractured the hope for eradicating illiteracy.

The horizontal economic burden reached unacceptable ebb, which caused lingering poverty and starvation. Not surprising, the United Nations Development Programme’s (UNDP) working paper titled, ‘The Economic Crisis, Violent Conflict, and Human Development,’ published in 2009, notes that violent crisis precipitates poverty. It further affirms that the latter can be a catalyst for conflicts, now and in the future.

Amidst the hopelessness and the treachery, the resilience of the human spirit remains evident. It was not merely the ability of the wounded to cope with the tragedy that surrounded them, but the sheer determinations to pick up the little pieces and build again.

Like many other sons, daughters and parents of the affected, Kaniki saw hate in plain clothes through his tender eyes.

“The idea that one died because of who they are is outraging and no one should ever experience that again,” Freddy said.

How does one heal and how can a people rise from the trauma of such injustice? Where is morality and where is the innocence of human reason? Martin Luther King Jr saw injustice and the brutality of man against man and lamented: “Somebody must have sense enough and morality enough to cut off the chain of hate and the chain of evil in the universe.” It is a decision one has to make in order to heal and move forward. It can’t be done overnight. It is a grueling and sombre process.

Hate had to give way. Eight years after the end of the war, on the very expanse of land where many Hutus and Tutsi’s lost their lives in the ethnic conflict, Freddy, a victim of the unfortunate war, established the Burundi American International Academy (BAIA). BAIA offers students the unique platform upon which their creativity and innovativeness are stimulated and challenged in ways that make learning exciting and fulfilling. With a hands-on approach, students enjoy guided access to modern robotics and other tech tools necessary for competitive global participation.

The academy stands out as a unique vehicle to strengthen the weakened education sector affected by the conflict. In more ways, and far broader than the above, BAIA is a symbol of a fulfilled hope and the aspiration of a healing heart. Freddy, in articulating his manifesto for the project, posits that above and beyond knowledge, his goal is to sow into the conscience of the coming generation a seed of responsibility, dignity, respect for others and the, ”recognition that we are all bound together in ways that are invisible to the eye; the oneness of humanity.”

It was the only moral choice for the preacher’s son as he sought to bring reason to undress the darkness and the shackles of tribal conflicts. He admits that being well off or successful in America is not enough.

“I remember what I went through losing three siblings and a father to ethnic violence. That memory is a persistent call in my soul and it isn’t a call for faintness and docility but rather to do something for the betterment of our inherited society.”

“Burundi must gather once more from the ashes, build again and thrive, and what better way than to lay a solid foundation in education,” Freddy said. “We have a responsibility to address issues of our time to pave a path for future generations and to ensure they inherit a better society. I am a strong believer in education as the cornerstone of any country’s development.”

Four people died on Saturday, October 26, after the cars they were traveling in collided head-on along the Mombasa-Nairobi highway