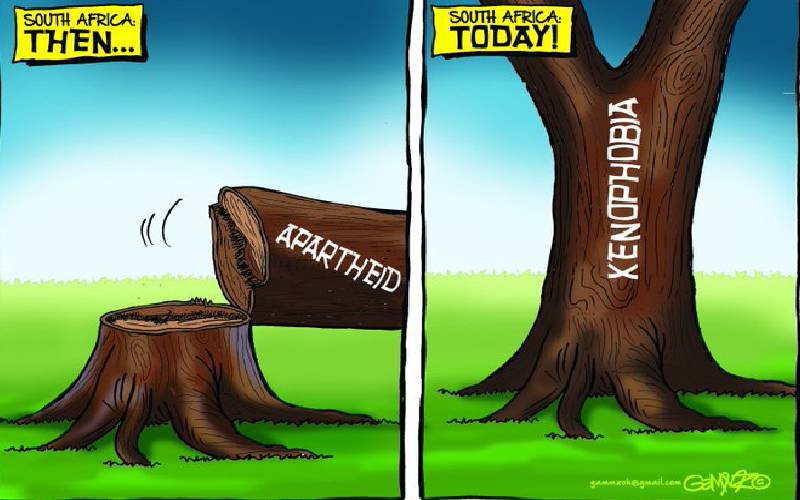 d by his partner for another, he reveals that he “always had the winning hand” in the sense that he himself was never faithful. In a post-modern world where values are relative, nothing is as it seems and there is always a story behind the story.

A spate of xenophobic attacks in South Africa (SA) has elicited righteous indignation all over the continent. That a person of can attack another for no other reason than in nationality has seen many take umbrage.

The perceived slight is made all the more unforgivable when considered against the fact that black South Africans were recipients of from many African nations in the struggle against apartheid. But are South Africans ungrateful? Have they bitten hands that previously fed them?

South Africa is referred to as the Rainbow Nation because of its multiracial and multicultural makeup. But it is just as variegated when it comes to the distribution of wealth. It has some of the continent’s wealthiest as well as the poorest.

It is instructive that the xenophobic flare-ups have been in areas where the poorest . It is also noteworthy that these are the areas that hide thousands of undocumented immigrants who make their way into the country through its porous borders. These are they who have borne the brunt of the attacks.

Questions arise. Who are these undocumented immigrants? Why do they choose South Africa over other countries? Contrary to popular belief, most illegal immigrants in the country are not refugees but rather, economic migrants.

There is a difference. The 1951 Geneva Refugee Convention defines a refugee as a person who has a “well-founded fear of being persecuted for reasons of race, religion, nationality, membership of a particular social group or political opinion and who on account of that fear, is unwilling to return to their country of origin.”

Many of the illegal immigrants in South Africa do not fit the definition. They have no fear of persecution in their countries of origin. Further, they bypass relatively safe countries to make the arduous road trip to of the continent. Which leads to the conclusion that they are migrants purely for economic reasons.

The problem of economic migration on the continent has been a of the failures of many African governments to provide opportunities for their citizens.

Journalist Chris Erasmus captures this succinctly when he says that Africans “want to feel safe. They want to feel like their government is working for them, rather than in the interests of a select few at the top of the governing party. The landless want land and they want it now. People want a county that is prosperous where the government actually works for its citizens.”

Erasmus’s quote speaks to the situation in Kenya where Mau evictees have not been given alternative land to settle on.

It cuts to the heart of Kenyans who feel the Government exists to serve the parochial interests of those at the helm.

The situation is appreciably worse in West African countries where government services are non-existent and opportunities for the region’s burgeoning youthful demographic cohort are nil.

South Africa serves as a transit point for reprobates seeking to enter the West through South America. It is thus, a staging ground for many illegal migratory expeditions.

However, it also serves as an end destination in itself because of its relatively big economy. But it has massive problems of its own even without undocumented aliens.

There has been an outbreak of popular anger because of massive unemployment. Unlike Kenya, which has a venting outlet through the informal economy, South Africa does not have a similar blow-valve.

Illegal foreigners become victims, with the dubious duality of providing avenues of expression of pent-up frustration and at the same time, sending a chilling message to those in authority that unless radical steps are taken, it will not be business as usual.

There are many who have decried the dearth of Pan Africanism and seen the attacks on undocumented migrants as an affront to the ideals of the continent’s founding fathers. But Pan Africanism can only flourish where relationships are symbiotic.

Illegal migrants are a strain on the resources of their host countries. They are unlike investors who set up industries that bring benefits to economies. Yet their countries of origin cry foul the loudest, never mind that their failures are the cause of economic migration. Who is fooling who?

End is nigh for Kenya and US's dominance

End is nigh for Kenya and US's dominance