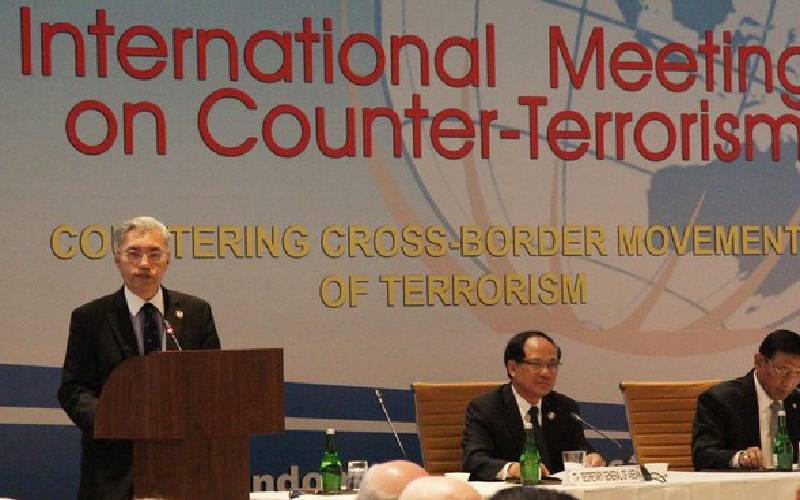 An important meeting taking place in Nairobi this week provides a good platform to craft a cohesive and broad-based platform to develop a counter-terrorism approach in the region, even as the world grapples with strategies to tackle the global crisis.

This is a follow up to June last year’s first-ever United Nations High-level Conference of Heads of Counter-Terrorism agencies of Member States in New York convened by UN Secretary-General António Guterres.

This week’s regional conference is the lead-up to the next High-level Conference that will be held in June 2020 in New York to promote the implementation of the UN Global Counter-Terrorism Strategy and relevant General Assembly and Security Council resolutions.

The conference is important as it comes at a time when the International Crisis Group (ICG), in a report published in September last year titled, Al Shabaab Five Years after Westgate: Still a Menace to East Africa, indicated that countries in East Africa are still vulnerable to terrorist attacks.

Although actions by individual states in the region to counter-terrorism seem to have paid off, the only way the Horn of Africa will benefit from the ongoing global efforts is by crafting a collective approach.

Due to its proximity to Somalia, a common porous border, a large number of Somalia citizens in the country and its decision to move military into Somalia in 2011, Kenya remains the most vulnerable country to jihadist attacks outside Somalia and must lead this initiative.

Angered by the decision to move Kenyan soldiers to Somalia, the jihadist group also increased its attacks on Kenya, staging invasions that have led to deaths of innocent people.

In 2016 Al Shabaab attacked University of Garissa causing the deaths of 147 students. Seventy lives were lost in Westgate raid in 2013 while up to 200 Kenyan soldiers are said to have died during the El Adde military camp attack inside Somalia.

In January this year Kenya lost over 20 citizens when the Al Shabaab attacked Dusit 2 hotel in Nairobi.

The Dusit 2 attack revealed the changing face of jihadists' modus operandi as the terrorists organised the offensive outside traditional methods. The attack was planned in a suburb right in the heart of Nairobi.

Although the Nairobi conference will focus on broad-based counter-terrorism measures such as the deployment of anti-terrorism police in the northern Kenya, an increase in defence budgetary allocations for acquisition of equipment, role of the international community and intensified border patrols, the role of local communities and their leaders should not be lost.

Kenya has already initiated the Nyumba Kumi initiative which encourages citizens to know their neighbours and report any suspicious activities to police.

The ICG noted that unlike in Kenya and Uganda where militant attacks attract sustained attention, this has not been the case in Tanzania. According to the report, media coverage has been scant in part because Tanzania is less open to international media than its neighbours.

Tanzania has in the past acknowledged that most of the foreign Al Shabaab recruits in Somalia are from the country. Al Shabaab recruited the second biggest number of fighters from Tanzania between 2009 and 2012.  This is evidenced by the increasing number of Tanzanians facing trials in Kenya for trying to cross into Somalia. The highest number of recruits came from Kenya.

The report said Uganda security forces have been operating in close collaboration with Western intelligence agencies since 2010.

It is this intelligence sharing that helped thwart attacks targeting bars, a hotel and a university in 2014. Other countries in the region ought to adopt the strategy.

In 2014, five countries; Iraq, Pakistan, Afghanistan, Ukraine and Somalia – accounted for 57.2 per cent of the world’s total terrorist attacks and more than half of the worldwide terrorism-related fatalities.

By Elias Mokua 37 minutes ago
Forget manifestos tell us how you will end graft, joblessness

By Jennifer Anyango 1 hour ago
Ruto's plans for Agriculture