Opposition to the housing tax ignores our core values 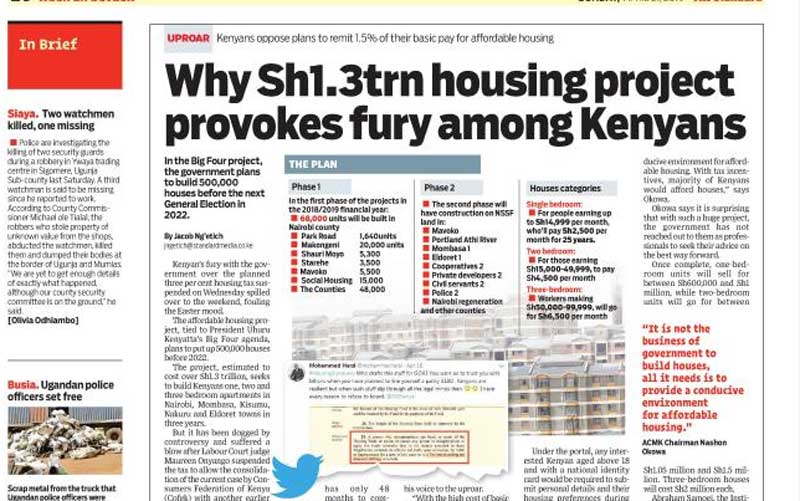 English philosopher Thomas Hobbes had written extensively about the human condition that predated the foundation of legitimate governments. In the state of nature, Hobbes argues, no one is safe and under a state of lawlessness “Homo homini lupus ut homo. (Man is a Wolf to Man)”.

A legitimate government provides us with the security we need to live and work free from violence. This includes the basic functions of government: To keep its citizens protected from external military attacks and from internal crime.

Our 2010 Constitution, like many other modern states, ascribes an even bigger role to the government. It recognises a link between security from physical aggression and security from poverty. Therefore, we expect our government to take responsibility for much more than merely managing an army and an effective police force.

We demand that it safeguards the values we share as Kenyans: “Human dignity, equity, social justice, inclusiveness, equality, human rights, non-discrimination and protection of the marginalised”. Having been plagued with systemic corruption for decades, we further expect a government that will uphold “good governance, integrity, transparency and accountability”

Best roof colour? Not about taste...

We consider housing a basic human right and an essential part to our equality. Yet according to the World Bank, there has been a chronic gap in building the necessary amount of housing units per year, which puts us in a housing deficit of more than 2 million units.

Nearly 61 per cent of our hard working and rent paying brothers and sisters in cities live in unrecognised slums. That is unacceptable. Affordable housing units is nothing less than a derivative of our constitutional values. Replacing insecurity, it also helps to prevent crime, in line with the basic responsibility that Thomas Hobbes assigns to the government.

Against this background comes the Big Four agenda and the Boma Yangu programme to build 500,000 housing units for low and middle-income households. As of Tuesday April 16, only 205,899 citizens had registered, three months after its launch.

The Housing Levy Fund is how we can fund the hugely popular Boma Yangu programme, by deducting 1.5 per cent from every worker’s salary and matching it with an equal contribution from the employer.

Some may ask why burden ourselves with a new tax? Well, there is a lot to pay for! Existing taxes are already allocated to other approved and delayed projects while funds unexpectedly recovered from corrupt officials during the current crackdown are desperately needed to tackle the unexpected levels of drought.

The Housing Levy, on the other hand, would generate Sh57 billion a year in a steady way that is in line with the planning and implementation needs to solve our housing crisis. That is why this levy is not only just, but necessary.

The Housing Tax is progressive; the more you earn, the more you contribute. It reflects what it means to be “compassionate and humble” (1 Peter 3:8), a solidarity necessary not to go back to the state of nature that Hobbes describes, where we “bite and devour each other” and are ultimately “destroyed by each other” (Galatians 5:15).

Additionally, it is a transparent tax, earmarked for addressing the national housing crisis, designed to make corrupt misallocation and embezzlement of funds much harder.

That is why the opposition to the Housing Tax, both from the Central Organisation of Trade Unions and the Consumers Federation of Kenya, is particularly disappointing. They are the first who should cheer for a government that takes responsibility for workers’ rights.

Their objection is based on the fact that some of those taxed already live in property they own. That is preposterous. Taxes are meant to serve society at large. It is not only farmers who pay for aid into the agriculture sector. It is not only the youth who pay into the education system. We are taxed to live in a society that leaves no one behind and abides by the values we uphold.

We cannot expect the government to mitigate social problems while refusing to fund even the most popular plans it presents, such as the affordable housing programme. Untie the Government’s hands and let it build those homes.

Mr Temba is a communication consultant.