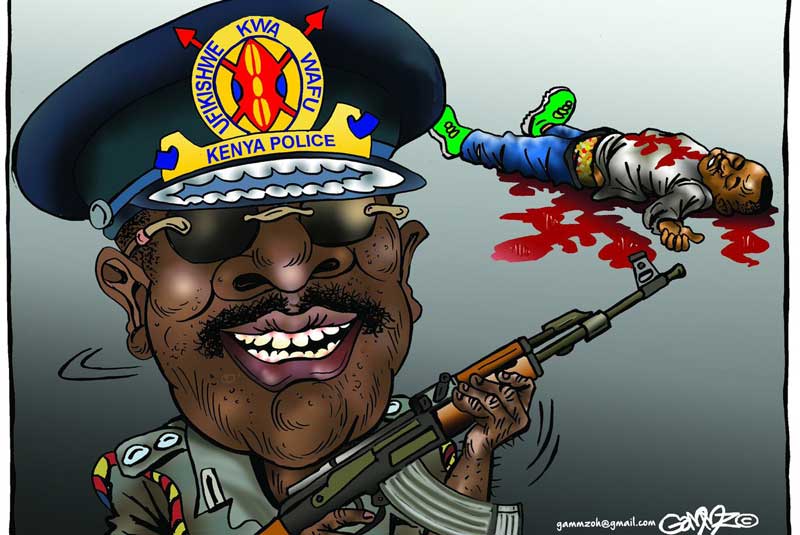 Towards the end of 2018, the High Court of Kenya convicted former Ruaraka police station OCS for the murder of Martin Koome, a man who had been booked at the police station on a domestic violence issue.

Initially, a fellow cellmate, one David Kioko, had been framed and wrongfully charged with the murder of Martin based on false and coerced testimony from other cellmates.

The Department of Criminal Investigations got wind of the ploy, which led to withdrawal of all charges.

The case is a demonstration that when proper investigations are done, and every agency within the criminal justice system plays its part, justice is indeed within reach for all Kenyans, even in cases of torture and extrajudicial killings such as the senseless killing of Leeds University Student, Carilton Maina.

In 2017, National Coroners Service Act (NCSA) and the Prevention of Torture Act were passed into law, yet they are yet to be operationalised.

The NCSA establishes an independent Coroners Service in Kenya that is mandated to investigate all violent, sudden or suspicious deaths.

Moreover, the law creates a framework for exhumation of bodies at the order of the courts; requires mandatory reporting of deaths; sets out procedures for investigations; and, empowers the Service to advice government on policy issues.

Importantly, the law makes it mandatory for the Police and Prison Officers to report any death that occurs within a prison or in police custody which, as a matter of law, must be investigated and a report made and furnished to IPOA.

It also requires any officer present at the time of the death, or who found the dead body to secure and preserve the scene until a coroner arrives. The law further makes it a criminal offence for any one, especially public officers to tamper with evidence or the scene of crime or obstruct a coroner in due execution of his duties. Officers who do this can be jailed for 2 years.

Additionally, any person who cooperates with instructions of the Coroners Service enjoys legislative immunity from any civil or criminal proceedings to ensure that maximum information is furnished to the coroner.

It enables witnesses to freely give information even when it may be against their superiors.

If this law was in place in the Carilton Maina scenario, the officers would have been compelled by law to preserve the scene and swiftly make a report to IPOA. In this case, IPOA learned about the incident from the media.

Similarly, the Prevention of Torture Act provides for a clear platform to actualize several fundamental articles in the constitution, including the non-derogable right to freedom from torture and cruel, inhuman or degrading treatment or punishment; the respect and protection of human dignity, and freedom and security of the person.

The law requires those perpetuating torture and ill-treatment to no longer be charged with such crimes as assault, but with the more serious crimes of torture or ill treatment that now attract a sentence of not more than 25 years and 15 years respectively.

The law has mandated the KNCHR to be the focal organization required to take lead in the implementation of the Act regarding monitoring, promotion, protection and reporting.

Had the torture law been in place when Martin Koome was tortured while in police custody, eventually leading to his death, it would have been very difficult to cover up the cause of death and to frame a fellow inmate; and, even if Martin had not died, the former Ruaraka OCS would still be liable for between 15 to 25 years in prison.

Interestingly, notwithstanding the passage of two pieces of legislation providing for the Coroners Service and prevention of torture, the laws are yet to be operationalised, mainly because the Attorney General has not yet issued the guidelines, rules and regulations for them, yet they are a vital cog in the protection of human dignity, the rule of law and police reform.

Having ushered in 2019, it is imperative that the Attorney General moves to formulate guidelines, rules and regulations for the two laws to enhance police accountability and protection of human dignity and right to life in line with statements made by the President and the CS Interior in 2018.

Uhuru Cabinet must heed his advice on better performance

Kenyans will particularly be watching to see if the cabinet secretaries will invigorate the President’s war against corruption.