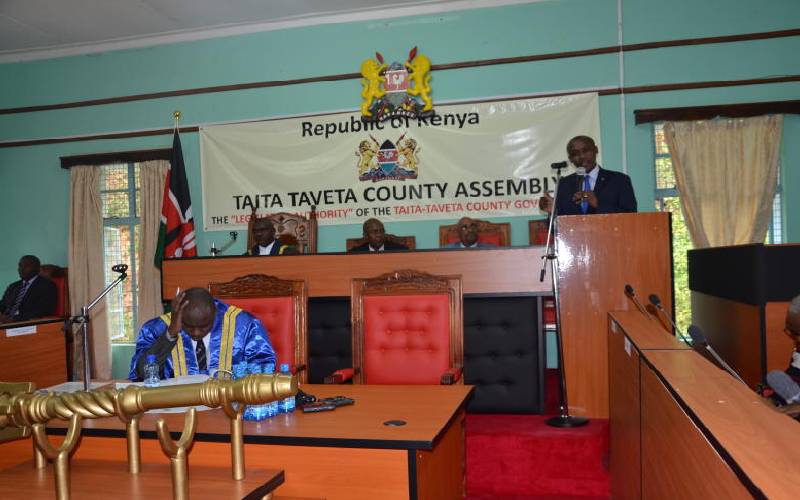 A row has erupted between MCAs and the executive in Taita Taveta County over the decision to send two ward administrators on compulsory leave.

The assembly resolution passed a fortnight ago recommended that Werugha ward administrator Stephen Saleka Njumwa and his Wundanyi-Mbale counterpart Mary Mngola be sent on a 30-day compulsory leave.

The resolution was passed through a statement sought by the Wumingu-Kishushe Ward rep Newton Salim.

The MCAs said two weeks had elapsed and no action had been taken against the two administrators who are still in office.

In the resolution, the MCAs said the two contravened article 6 (2), 185, 195, 75, 76, 77 and 78 of the Constitution. The more than 20 MCAs adopted the report by the House committee and gave Governor Granton Samboja's administration five days to expel the two ward admins.

In their recommendations, the MCAs claimed the administrators were undermining them in their respective wards and engaging in politics contrary to public service conduct of ethics.

The report was tabled in the assembly by the administration, security, devolution and public participation committee vice-chairman Bertina Mwaiseghe.

It was prepared after Wumingu-Kishushe MCA Newton Kifuso sought a statement on the conduct of the Wundanyi Sub County Ward administrators.

“The executive has persistently been ignoring the house resolution and summons. It is high time that we take disciplinary action against them. We have the powers of the High Court,” Kifuso told the assembly Speaker Meshack Maganga yesterday.

County Secretary Liverson Mghendi said he received the house resolution on the two administrators on November 3.

Mghendi’s response letter to the resolution seen by The Standard said disciplinary action against the two administrators has since commenced.

He disclosed in his letter copied to the governor that the county human resource advisory committee will conclude findings based on the county assembly’s recommendations and revert accordingly.

The county secretary however said that Mr Njumwa is no longer acting ward administrator in Wumingu-Kishushe ward. But the assembly Devolution and Public Administration committee chairperson Jones Maskuji said Mghendi's response is not satisfactory.