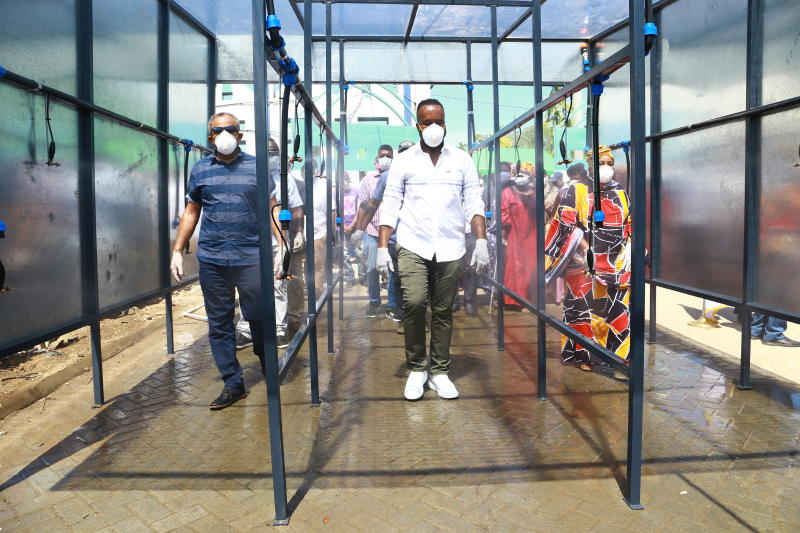 From acquiring ventilators to establishing a Sh700 million food kitty and disinfecting spray booths, the governor has put up a spirited fight against the spread of coronavirus.

After the first case of Covid-19 was reported in Kenya on March 13, Mombasa Governor Hassan Joho (pictured) was among the first to call for a total lockdown to slow the spread of the virus.

He argued that China, where the virus was first reported in December last year, contained it through a lockdown of Wuhan city, the epicentre of coronavirus.

But he also reasoned that because a lockdown has socio-economic implications it should only be enforced after putting in place mitigation measures to cushion the poor who live on a daily wage.

Initially, there was pressure to shut down the Export Processing Zones (EPZ), which employ thousands of workers but the national and county governments agreed with them to operate under strict social distancing measures and mass produce millions of face masks approved by the World Health Organisation (WHO) for free distribution to residents.

Joho has also advocated compulsory face masks and mass testing of Mombasa residents and officials told the Saturday Standard that subject to the arrival of test kits, this will start this week beginning with health workers.

The governor has also agreed with apparel EPZ factories to produce masks ahead of the start of mass testing.

“EPZs in Mombasa have donated a million masks. We intend to start mass testing very soon,” said Joho in his bi-weekly address early this week.

On March 14, he convened a meeting of all leaders and stakeholders during which a series of measures were announced, including a shutdown of markets, all bars and nightclubs and new restrictions on hospital visits.

Today, Joho appears to have been vindicated after it emerged that Mombasa, Kilifi and Kwale account for 14 per cent of the number of positive cases nationally.

Even before the first case was reported last month, the county launched a 50-patient isolation and treatment centre at Coast General Hospital and promised more at sub-county hospitals.

Joho then published a plan that identified 227,404 vulnerable families he said would be fed daily by the county government from a Sh700 million kitty.

The county government proposes to supply Sh200 million, with the rest coming from the private sector, the national government, the Joho Foundation and Suleiman Shahbal Foundation.

In conjunction with the national government, the governor formed a multi-agency response team against the virus chaired by businessman and philanthropist Abdul Sanji, with Joho and Mombasa County Commissioner Gilbert Kitiyo as members.

Within days of the launch, Joho received 10 ventilators for the Coast General Hospital.

On Monday, the governor commissioned 10 Draeger Evita XL pediatric ventilators and one low-temperature peroxide gas steriliser worth Sh60 million to aid in the fight against Covid-19.

Eight more ventilators are expected next week, taking the number at the Coast General Hospital to 30, according to the facility’s CEO Iqbal Khandwala.

Still at Coast General Hospital, the county administration has set aside and equipped 19 special rooms for treatment of Covid-19 patients.

This week, Mombasa became the first county to have a fixed disinfecting spray booths mounted with thermal cameras at the Likoni channel, Nyali bridge and all areas where crowds gather and pass.

The spray booth springs mists of disinfectants from its exhaust streams to the passing pedestrians to reduce microbial presence on their bodies and clothes.

“It is just humid. It does not wet clothes but when it lands on uncovered parts of the body it has the same reaction as a sanitiser,” said Ahmed Kombo, a Likoni resident.

The booths are the initiative of the Hassan Joho Foundation, the Suleiman Shabhal Foundation, the Technical University of Mombasa and the Kenya National Chamber of Commerce and Industry (KNCCI).

On both sides of the Likoni channel, there are separate areas for spraying men and women commuters before boarding the ferries.

The Hassan Joho Foundation is also installing additional 10 disinfection spraying booths in markets and bus stages, with a capacity to spray up to 400 people in 10 seconds.

Earlier, giant elevated tanks were built on both sides of the Likoni channel to enable the 350,000 people who board the ferries daily to wash their hands to prevent the spread of coronavirus.

The water taps are strategically placed on the walls of security scanners on both sides of the channel where pedestrians are required to wash the hands before boarding the ferries.

Meanwhile, the county has cut off water supply to industrial areas and diverted it to over 120 informal settlements across the county in the war against the deadly virus.

Anthony Njaramba, the Managing Director of Mombasa Water and Sanitation Company (MOWASCO), said 30 water points have been established in slums.

“All the water is now for home use, especially in the 120 villages in the slums,” said Mr Njaramba.