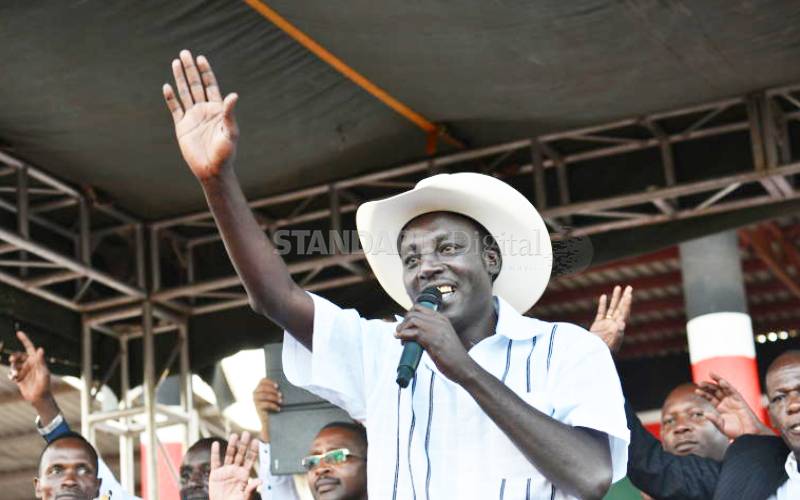 President Uhuru kenyatta led fans, leaders and fellow artistes in paying tribute to a musician who used his talent to draw huge following in Mt Kenya.

“DeMathew was a great composer of Kikuyu lyrics, which carried undertones of societal ills, including alcoholism, and promoting peace and cohesion in society,” the President said as he sent his condolences to the family, friends and fans of the musician who died in a road accident yesterday.

Deputy President William Ruto on his Facebook page wrote: "De Mathew mentored many aspiring musicians and campaigned for a platform to empower them. He was artistic, sociable and an eloquent performer.”

Gatundu South MP Moses Kuria eulogised DeMathew saying: “John was not an artist. I have always referred to him as a modern Kikuyu prophet - Munabii - alongside the late Joseph Kamaru and Muigai wa Njoroge."

Mukulima X Muriuki eulogised DeMathew, noting: “I will remember DeMathew as a lyrical genius, a man who loved the stetson hat and whose signature sound in every song was a page borrowed from CDM Kiratû’s book: “Ceeeeiiiiiyaaaa”.

Starehe MP Charles Kanyi aka Jaguar said he was mentored by DeMathew to pursue his talent in music.

Murang’a Governor Mwangi wa Iria, Senator Irungu Kang’ata, MPs Joseph Ngugi (Gatanga), Peter Kimari (Mathioya)  and Gladys Wanga (Homa Bay) mourned the late musician, describing him as a hero who will be remembered for his dedication to educate the community through songs.

Iria said the late will be remembered for his special life changing songs and entertainment.

Wanga said she met DeMathew  during a Embrace Women rally at Kimorori grounds at Kenol market.

Other leaders from Gatanga who mourned the late are Simon wa Jogoo, Patrick Karangu and Ignatius Gichuhi.

“Most artistes crisscross the counties and towns for performances late in the night and that exposes them to serious dangers on the roads,” he said.

Veteran music producer Ted Josiah called upon the Content Management Organisations collecting royalty for artistes to come up with welfare blueprint for artistes in the future.