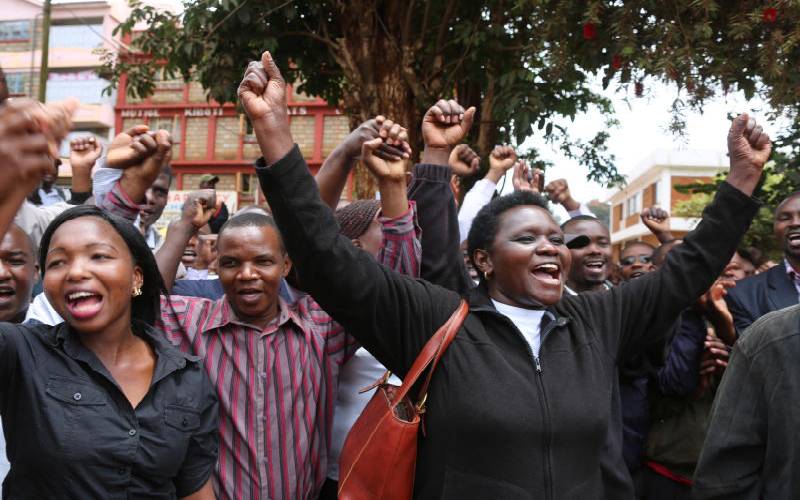 The High Court has stopped a planned strike by health workers in Kirinyaga county.

The government, upon being served with the seven-day strike notice dated May 20, by the medics, rushed to the Employment and Labour Relations Court in Nairobi and sought an injunction under a certificate of urgency.

Following the application County Secretary Joe Muriuki, the court ordered that the said strike be blocked until the matter is heard and determined.

The restraining orders, to county government health workers who belong to four different unions, were issued by Justice Maureen Onyango.

Governor Anne Waiguru's administration argued that the strike was unlawful, prohibited and not protected under the labour laws.

While blocking the industrial action, the judge also said the two parties were at liberty to seek a conciliator to resolve the dispute.

The employees are members of Kenya Medical Practitioners and Dentists Board, Kenya National Union of Nurses, Kenya Clinical Officers Union and the Kenya Laboratory Officers Union.

In their notice, the workers cited delayed promotions and poor working environment as grounds for industrial action. They also accused their employer of highhandedness.

The four trade unions will bear the cost of the application by the county government.

Kerugoya referral hospital, where most of the affected health staff are stationed, dominated media headlines recently after 346 casual workers were sacked.

The health workers said they were at a risk of contracting diseases due to filth at the hospital as waste was uncollected after the sackings.

This is the first labour disputed between the county government and the health workers.

Orders by the court provide a relief to patients, most who cannot afford treatment in private facilities.

By Nderitu Gichure | 7 days ago