By Nairobian Reporter | 7yrs ago 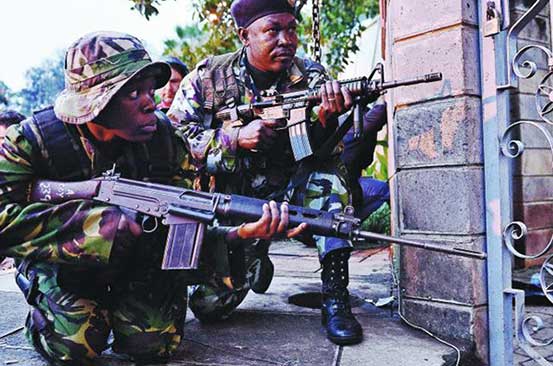 This comes amid claims that some Moi University students may have joined the terror group. The disturbing news comes a few weeks after the National Counter Terrorism Centre blew whistle on the worrying trend .

NCTC said in June that three students from the University of Nairobi had joined Al-Shabaab.

“ There is increased recruitmnet, training and indoctrination of the youth into terrorism cells. These terror groups are now targeting brilliant youths to recruit,” said then NCTC director, Isaac Ochieng’ during a counter terrorism conference in Nairobi.

More worrying is the fact that some students have become conduits of extremism. This has prompted a few concerened students to form an association to counter recruitment of gullible colleagues.

“The campaign revolves around enlightening students about the dangers of associating with terror and other illegal groups,” says Allan Chacha, the chairman of the association.

UCSOAK maintains that terror groups like Al-Shabaab and Islamic State (ISIS) target university students because they are role models in society, and once recruited, it is easy to influence others to join.

“The invitation is by courtesy, but we shall use it as a pilot study,” said Kinoti.

A classmate of Waqo said he was a quiet student who sold shisha and miraa to students, besides running other businesses at the Stage Market.
The four missing students had rented houses outside the campus. There are reports that Tirop was a devout Christian.

“I saw him last this semester. We met along the streets in early September and even invited him to my room for supper. He was part of our religious dance group before he converted to Islam,” said the female fourth-year student.

Uasin Gishu County Commissioner Abdi Hassan confirmed that parents and the institution have made reports to the police about the four missing students. “We have received reports of four missing students from Moi University main campus whose parents reported to the police that their whereabouts are not known,” said Hassan, adding that there are indications that the students could have been radicalised.