A recent survey by PricewaterhouseCoopers paints a picture of huge losses companies suffer due to both internal and external crimes.

In Kenya for instance, 36 per cent of respondents that experienced economic crimes lost over Sh10 million with 2 per cent losing in excess of Sh500 million.

“In addition to the direct financial losses, organisations are exposed to fines and penalties by regulators, claims from affected third parties and damage to their brand and reputation, as well as dampening of employee morale, especially collateral victims not involved in the crimes,” according to the report

“In the past, most of the incidents were perpetrated internally, however in most cases, there is an element of collusion with external actors.”

In Kenya and in Africa, internal parties were reported to have been the most common perpetrators of economic crime unlike globally where the incidents by external perpetrators were higher.

Who is committing these crimes?

Operations staff: Fraud committed by operations staff was the highest of the fraud attributed to internal actors at 53 per cent. It could be an indication of the ineffectiveness of controls at lower levels or more daring attempts by junior staff. Middle-level management was the most active group of internal actors in 2018 (decreased from 41 per cent to 28 per cent).

Kenya, however, seems to be the exception, as elsewhere, senior management were reported to have committed more fraud. 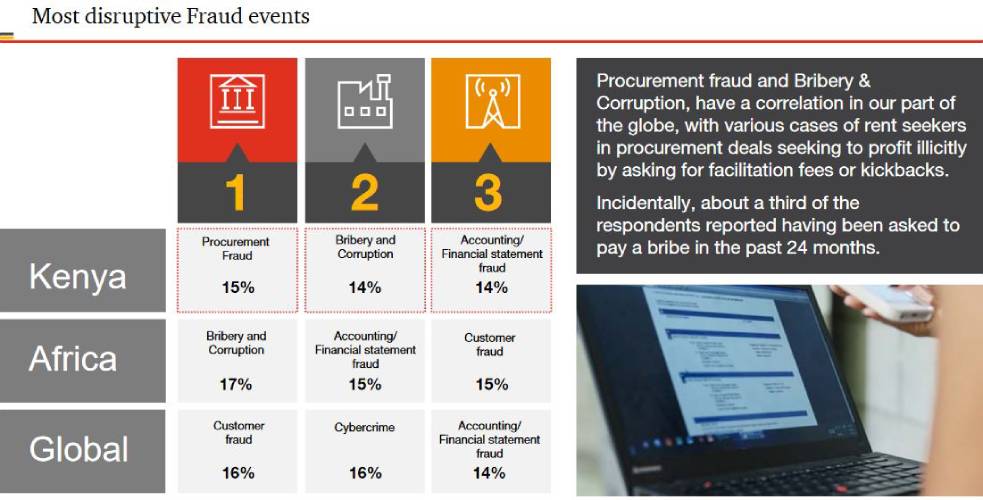 Vendors and suppliers: As more companies invite vendors and other third parties into their organisations’ operating environments through outsourcing of various services, they expose themselves to risks from parties seeking to illicitly enrich themselves at their expense.

With 34 per cent of economic crimes attributed to these third parties, this paints a scary picture as to the level of trust needed and risks organisations face in the business environments they are forced to operate in.

Gauteng Premier David Makhura, speaking after the parties failed to agree a new mayor and how to best manage the municipality