Nominated Senator Abshiro says appointment to KNLS Board was an error

Nominated Senator Abshiro Soka Halake has said her controversial appointment to the Kenya National Library Services Board (KNLS) as an error.

Abshiro’s name appeared on the Gazette Notice published on Wednesday, October 17, 2019 as one the people listed to serve to serve on the KNLS Board.

“Fellow citizens, colleagues, friends and family. Contents of the Kenya Gazette Notice No. 9871 of the 17th October 2019, appointing me to the Board of the Kenya National Library Services (KNLS) has come to my attention. I wish to inform that my gazettement as one of the appointees was an error,” said Abshiro in a statement on Friday.

The Senator was appointed to the KNLS Board in 2016 but later resigned in 2017 after being nominated to the Senate. 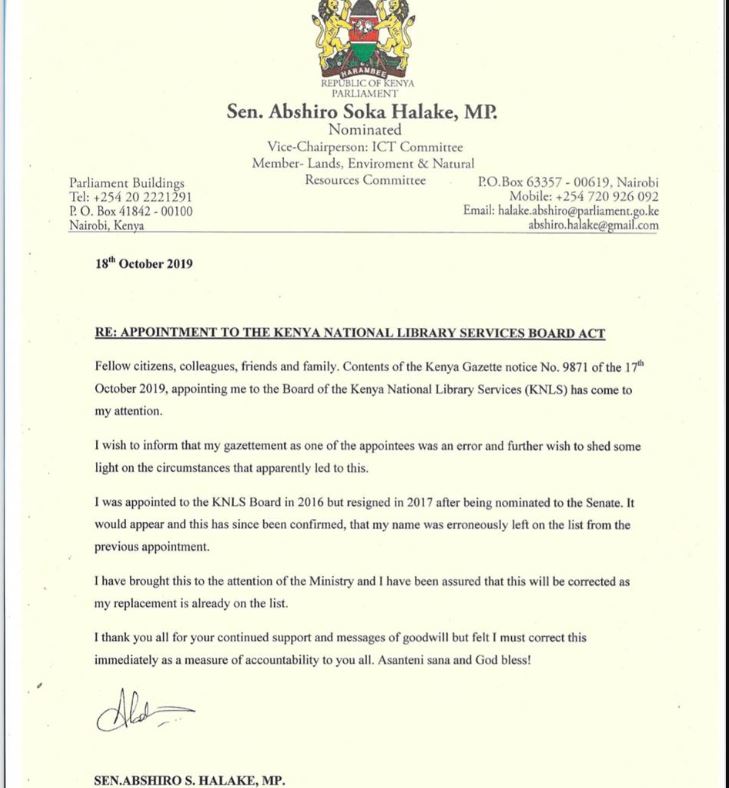 Halake said that it has been confirmed that her name was erroneously left on the list from the previous appointment.

She further said in the statement that he has notified the ministry who have assured him that it will be corrected.

This comes as President Uhuru Kenyatta continues to face fierce critics over preference for retirees in the government jobs even as millions of young Kenyans languish in unemployment.

The president’s decision to appoint former Othaya MP Mary Wambui, 69, as chair of the National Employment Board – the agency responsible for tracking employment trends for a youthful Kenya - drew anger from a section of Kenyans who felt slighted by the hire on account of her age and expertise.

The list of the President’s recent appointments is dominated by old men and a handful of women, some of whom served in Government long before a majority of Kenyans alive today were born.

Other recent appointees include; former Vice President Moody Awori, 92, to chair the Sports, Art and Social Development Fund, former Cabinet minister Noah Wekesa, 83, as chair of the Strategic Food Reserve Fund and former Head of Public Service Francis Muthaura, 72, as chair of the Kenya Revenue Authority, among others.

How to improve feedback during appraisals and assessments

Most of us have been on one or both ends of an appraisal during our careers.