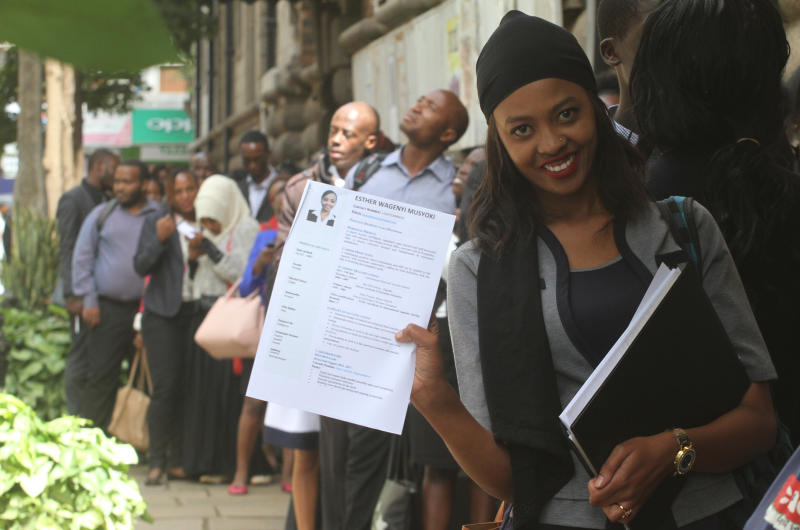 Only one in every 10 working-age Kenyans is assured of a pay cheque at the end of a given period, according to the Kenya National Bureau of Statistics.

The Statistical Abstract 2018 indicates that 2.6 million Kenyans in 2017, were in wage employment - or are assured of some payment on a daily, weekly or monthly basis for their work.

With official data showing that as at 2016, there were 19.3 million people in the labour force - aged between 15 and 64 years and actively looking for work - this means that a huge chunk of the so-called working Kenyans are engaged in menial jobs, such as those in the jua kali sector, where they are not guaranteed a decent income.

The report also pours cold water on the country’s ambition to become a middle-income economy, where consumers have a high purchasing power to splurge on luxurious products in the many malls that are springing up.

Although the majority of people in wage employment are in the private sector, 1,866,389 - a good chunk of them, 790,164 - live off the public purse, a situation that has seen the Government’s wage bill swell in recent times.

Ideally, the private sector should employ most of the people as it is the one that pays taxes for the Government to function.

Another report by the statistics office had controversially pegged the country’s unemployment rate - the fraction of working-age Kenyans out of work but actively looking for it - at 7.4 per cent.

“There are metrics and rules of defining unemployment which has been set by the International Labour Organisation and other international bodies. The numbers that we have in terms of unemployment are people who are willing, they are able, and they are actively looking for a job,” said Treasury Principal Secretary Julius Muia.

However, with 5.6 million Kenyans of working age being economically inactive, that is, not looking for work mostly due to school attendance and family responsibilities, it means that the country’s unemployment rate might be higher.

It is possible that those who are economically inactive simply gave up on job-hunting after a long and fruitless search.

But in what is an indication of the country’s low productivity, data shows that over half of the country’s working-age population has primary school level of education, thus lacking the skills required to turn the country into an industrialising economy, as envisaged in the development blueprint Vision 2030.

The working-age population is expected to increase to 28.5 million by 2020. Under the Big Four agenda, President Uhuru Kenyatta has made job creation one of his legacy projects.

He has said he expects to unleash jobs in the economy by bolstering the manufacturing sector.

City Hall to spend Sh50m on fuel per month

It currently costs City Hall Sh11 million per month to keep their squeaky vehicles on the roads.

By Entrepreneur.com | 1 day ago