Raila Odinga: There will be no sacred cows in ODM nominations 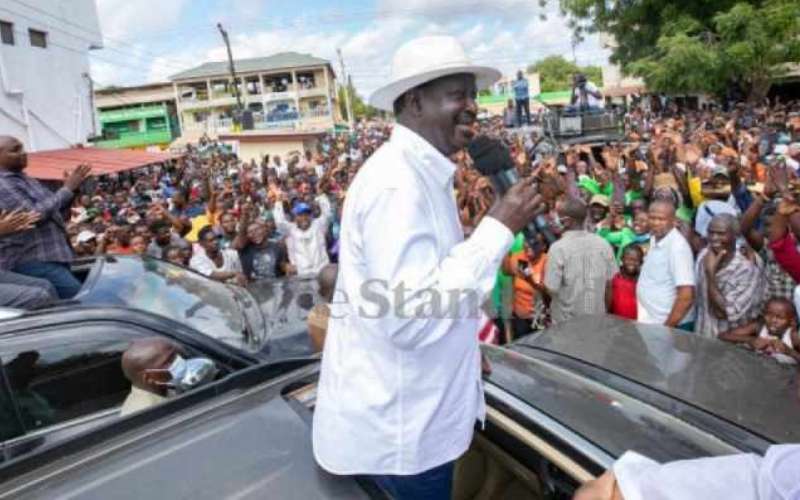 Speaking in Malindi today, Raila hinted at a pact with Jubilee Party in the coming days to harmonise their operations ahead of the general election.

He hinted at working closely with other political parties to ensure a first-round win in the general election.

Raila was meeting aspirants and elected leaders on arrival from Lamu County where he popularized his party’s Azimio la Umoja declaration on Sunday.

ODM leaders said that the party had learnt its lessons over the years and will not allow the nominations to be bungled like in the past.

“Nomination should not bring insanity and violence but there should be fairness. It should be open, democratic, free and fair,” he said.

The Orange party formed a task force after the bungled 2017 nominations that was led by Catherine Muma to compile a report of malpractices and possible solutions to the nomination headache.

The team came up with a raft of proposals to ensure justice and fair play.

Raila added that the party will repeat the nominations until a free and fair practice is achieved.

“Many people can’t differentiate between nominations and elections and that is why we adopted the four methods because we don’t want chaotic nominations,” said Raila.

Raila who is on a three-day tour of the Coast region is today expected to have a series of roadside stopovers in Malindi, Kilifi and Mtwapa town.

He said the party was gearing up to the signing of a pact with the Jubilee Party that will guide their operations ahead of the polls next year.

“Our party and Jubilee will have a pact in the coming days and I am happy to see how the party is run despite a few challenges here where some people want to fly and others don’t want to fly,” he said.

Premium
Why women fail to win big business contracts
Enterprise
By Graham Kajilwa
1 hour ago
Premium Why Ruto's honeymoon is over before it actually begins
Business
By Dominic Omondi
2 hours ago
Premium John Ngumi: The blue-eyed boy of State corporations
Financial Standard
By Macharia Kamau
11 hours ago
Home remedies to get rid of dark knuckles
Skin Care
By Esther Muchene
13 hours ago
Premium With polls done, you can as well kiss State subsidies goodbye
Financial Standard
By Macharia Kamau
19 hours ago
.