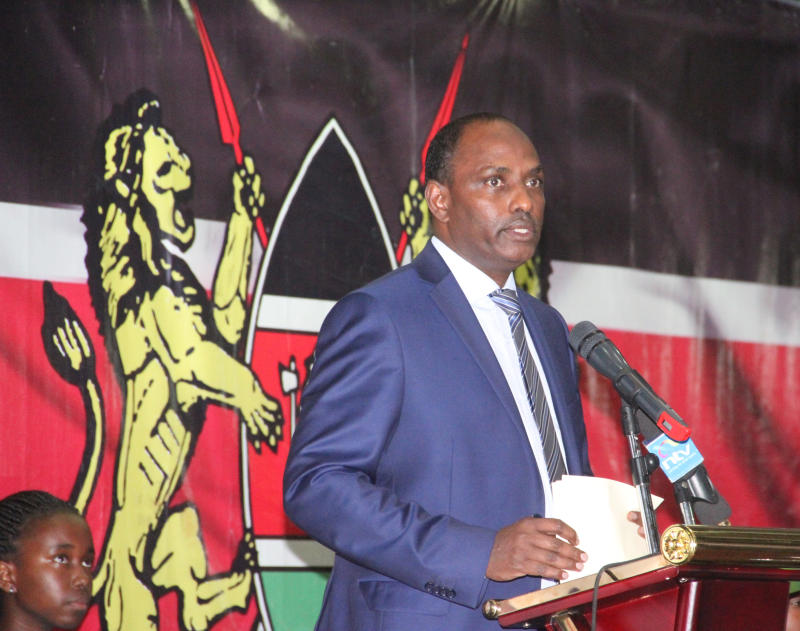 MPs have attacked Treasury Cabinet Secretary Ukur Yatani (pictured) for preparing a budget without taking into account the economic realities of the day.

According to Parliament’s Budget and Appropriations Committee (BAC), Treasury has ignored the economic impact of the Covid-19 pandemic while allocating scarce financial resources across the public sector.

Parliament wants Yatani to review the growth figures presented to reflect the impact that the pandemic has visited upon the economy.

It wants Treasury to seek new agreements with domestic and external lenders on how to go about settling Kenya's Sh6 trillion public debt.

In a report released last week, the budget committee questioned Yatani’s decision to allocate billions of shillings to the projects under the Big Four Agenda, even as the country’s economy is reeling from the effects of the virus.

“There is limited information to support how the total investment nationally will rise from 15.7 per cent of Gross Domestic Product (GDP) in the revised estimate for 2019-20 to 21.6 per cent of GDP in 2020-21," reads the BAC report.

With the depressed economic activity in the private sector expected to persist, MPs say Yatani’s 2.5 per cent growth projection for 2020 and 5.8 per cent for 2021 is very optimistic.

“The committee is further concerned that this growth premise has not adequately incorporated the impact of the health pandemic and is relying on past investment decisions particularly the Big Four Agenda investments to pull the country through the ongoing crisis,” the report averred.

In the 2020-21 budget released last week, Treasury has allocated Sh124 billion for development expenditure under the State department of Infrastructure, including Sh23 billion for construction of a rail transport network, Sh14 billion for marine transport and another Sh15 billion for housing.

“Investments under the Big Four Agenda projects are not substantive enough to offset the expected rapid fall in private sector investment and may therefore not be a strong driver of economic recovery in the coming financial year,” explained the Budget Accounts Committee in its report.

Over the past two months, virtually all sectors of Kenya’s economy have suffered as stay at home orders, curfews and physical distancing measures were enforced to help fight the spread of Covid-19.

Players in the tourism sector reported more than 90 per cent drop in revenues and hundreds of impending layoffs.

Analysts have further warned that with delays in producing a vaccine, the restriction measures being mooted will exacerbate the current global recession.

“Based on review of international experiences with the ongoing Covid-19 and past economic recessions, a strong, well-funded and multi-sectoral economic programme greatly helps support economic recovery by stimulating consumer demand, sustaining business activity and aiding the retention of jobs,” the BAC report asserts.

At the same time, MPs have asked Treasury to seek renegotiation of Kenya’s external debt obligations in light of the economic stagnation brought by the Covid-19 pandemic.

Kenya’s public debt has risen exponentially in the past decade and currently stands at Sh6 trillion, representing more than 60 per cent of GDP.

“Amid the ongoing pandemic, the committees urge Treasury to start the process of renegotiating the terms and conditions of existing loans, with a view of striking a deal for a moratorium, including having a grace period of interest and principle payments,” the report noted.

According to budget documents for the 2020-21 Financial Year, Treasury has set aside Sh900 billion to the repayment of debt obligations. This accounts for more than 90 per cent of the Consolidated Fund Services, which Parliament says costs taxpayers more.

“The Committee has established that the cost of debt-financing actually consumes more financial resources than development expenditure for which the debt is obtained,” stated the BAC in part of its report.

Parliament’s questions on Yatani’s budget for the 2020-21 Financial Year come despite Treasury’s calls for austerity across government spending that came months before the break of Covid-19.

“The government will initiate expenditure control and policy measures including budget rationalisation on non-core expenditures which include foreign and domestic travel, hospitality, training, communication supplies, printing and advertising, purchase of furniture and use of government vehicles,” said Yatani in September 2019 while kick-starting public participation hearings for the 2020-21 budget.

At the same time, Treasury effected budget cuts to Parliament and the Judiciary and blocked attempts by MPs to put a cap in statutory deductions.

“However, given that the country is facing the challenge of the coronavirus which is being experienced across the globe, there is a slowdown in economic growth leading to under performance of revenue. Further, there is need to provide resources to counter the effects of the Covid-19.”