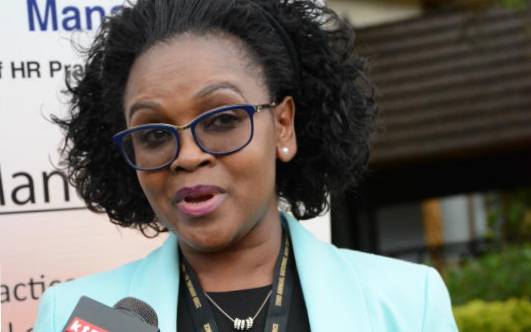 The Institute of Human Resource Management (IHRM) has expressed concern over increased job losses in the country, warning that this might lead to more crime and broken families.

Speaking at the start of the institute's 23rd annual conference at Sawela Lodge yesterday, IHRM Executive Director Dorcas Wainaina (pictured) noted that several firms were either winding up or downsizing, rendering thousands of workers jobless.

Ms Wainaina appealed to companies to try everything possible to retain staff.

“We have noted with concern the rising cases of job losses. Sending workers home is not the solution, it will end up creating a bigger problem,” she said.

The Institute attributed the job losses to changing economic times and mechanisation, warning that more workers could lose their jobs if their companies do not change with the times.

“The workplace is changing and companies should retrain their workers,” said Wainaina.

The institute supported the Government's plan to employ staff on short contracts, saying this would increase productivity.

"Majority of developed nations are taking that route, giving workers a chance to work for a period of time on condition that they deliver," said Wainaina.

She said with the changing times, the workplace was also changing, with many companies moving away from the 8 am to 5 pm work routine.

“We need to change our archaic labour laws to be in line with the current technology where anyone can work from anywhere and not necessarily from the office,” she said.

The executive director said there was a need for the Ministry of Education to review its curriculum in line with emerging courses that were more advanced and automated.

“We should be looking at changing our curriculum to address future employment opportunities,” she said.

Speaking during the three-day event that has brought together more than 1,000 human resource professionals, Wycliffe Osoro, a board member at IHRM, attributed rising job losses to the tough economic times most countries have been going through.

He was optimistic that this would change if Kenya improved the business environment.

“The country has to agree that the manner of conducting business globally has changed. We have to adjust to this. As an organisation, we are coming up with programmes to prepare workers for this,” he said.

Judiciary staff have to do without tea and meal allowances as cuts bite.